15 weird things girls do when they get jealous 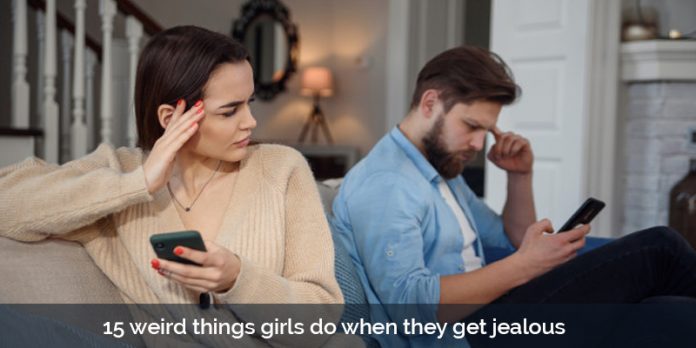 Girls do get jealous if their boyfriend looks at another girl. There are several signs girl is jealous and things that girls do when they get jealous. Jealousy is destructive.

Jealousy is acknowledged as a normal emotion. Girls do get jealous about a lot of things as they are possessive by nature. No matter how much trust a person may have in a person, still the person can be jealous, especially so if there is much care and love for that person.

Things that girls do when they get jealous:

Girls tend to lie and give answers to guys in such a manner that the real meaning is not known.

If the guy is seen flirting with another girl, the mood of the girlfriend changes. She may get angry or jealous. Girls are by nature quite moody. And they act strangely when jealous.

3. Asking a friend to stalk. At times out of jealous they may ask a friend to stalk their boyfriend if they suspect his interest in another girl. They would like to know who their boy friend is hanging wound with.

4. Ignoring him: Girls do tend to ignore their boyfriend if they are jealous and upset by his behavior.

6. Mentioning other guys in front of him: They tend to take name of other boys they know in front of their boy friend to make him jealous. It is sign of their own jealous feelings.

7. Pretend to be very busy: Girls pretend to be busy as they do not want to be ignored and in this manner they try to draw the attention of their boyfriend.

8. Laughing loudly when there is nothing to funny: Girls are good at hiding their emotions and they laugh loudly if she appears to be jealous about something.

9. Becoming clingy: Girls act clingy when they do not want other girls around their boyfriends.

10. Posting hot selfies: In order to make their boyfriend feel jealous about them, girls post hot selfies to show their attractiveness. Thye may wear a tiny outfit and place their post on social media.

11. Creating a dummy account: They create a dummy account to show that another person is interested in them. Thus they try to make their boyfriends feel jealous about them.

13. Check the phone of the boyfriend: They check the phone calls of their boyfriend if they happen to be suspicious like a detective. It is also a sigh of jealousy.

14. Faking an illness: They pretend to be ill in order to draw the attention of their boyfriend. Like in case he has a party to attend and lot of girls would be there. If the girl does not want him to go she will pretend to be sick.

15. Talking sarcastically: Girls tend to be sarcastic if they feel jealous. They will take jibes at their boyfriends.

Such behavior indicates signs a girl is jealous.

Jealousy is a state of mind and can affect a relationship. It depends upon the intensity of the jealousy. It can go out of bounds at times. It can destroy the relationship. Suspicion can go out of control. Girls are possessive by nature and would like that their boyfriend gives all his attention to her and not to other girls. Such are the things girls do when they get jealous