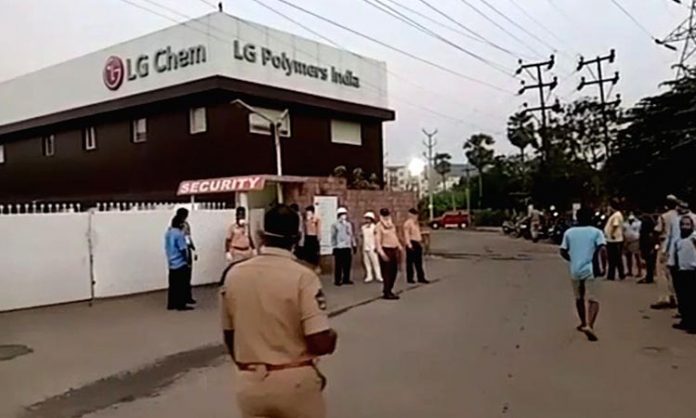 Four Andhra Pradesh Ministers and two MPs of the ruling YSR Congress Party spent Monday night in villages affected by a gas leak from LG Polymers India factory to instill confidence among the villagers who returned to their homes four days after the disaster.

Ministers Avanthi Srinivas, Botsa Satyanarayana, Dharmana Krishnadas, K. Kanna Babu, and MPs Vijayasai Reddy and MVV Satyanarayana stayed in the five villages near the chemical plant, interacted with the villagers, and tried to reassure them on their safety.

Vijayasai Reddy, who spent the night outside a house in Venkatapuram, said the effort proved that the government was not merely paying compensation but also wanted to instill confidence among people affected by the gas leak.

Twelve people were killed and over 400 taken ill following the leak of styrene gas from the chemical plant on the outskirts of Visakhapatnam in the early hours of May 7.

About 10,000 people from these villages were evacuated and kept in rehabilitation camps in the city. They started returning on Monday evening after the government declared the villages safe for living.

On the direction of Chief Minister Y.S. Jagan Mohan Reddy, the Ministers and MPs spent the night in the villages to instill confidence among the people.

Tourism minister Avanthi Srinivas, who spent the night at a house in Padmanabhanagar, went around in the village on Tuesday morning and interacted with villagers to know their problems.

The Minister claimed that normalcy has returned to the village. Agriculture Minister K. Kannababu said the villagers spent a peaceful night after four days.

The ministers announced that health camps will be conducted in all villages in the next 100 days to monitor the health of the villagers.

Vijaya Sai Reddy assured the people that the villages will be developed as a green and safe zone. The government will arrange food for the villagers, provide 25 tonnes of fodder for the cattle and ensure every possible help till the situation completely returns to normal.

They said volunteers will take up enumeration from Tuesday for payment of compensation. The government has announced a compensation of Rs 10,000 each to the people in affected villages.

The Ministers on Monday presented documents to eight out of 12 bereaved families relating to the payment of ex gratia of Rs 1 crore each. The payment for remaining cases will be made in a day or two.

As per the announcement made by the Chief Minister, those hospitalised for serious ailments would get Rs 10 lakh each and others admitted would receive Rs 1 lakh each. The entire cost of hospitalization will be borne by the government.