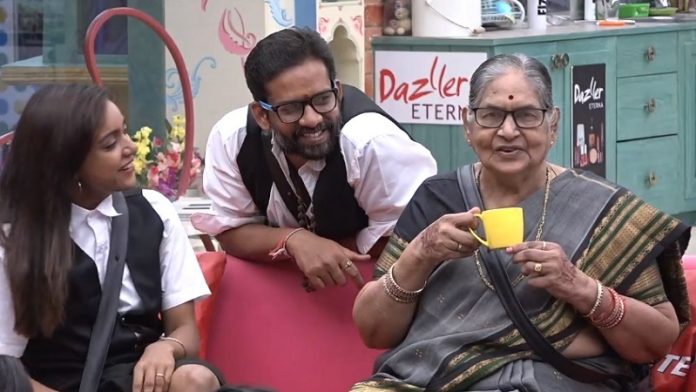 In yesterday’s episode of Bigg Boss, Varun Sandesh’s grandmother Rajyalakshmi entered the Bigg Boss house. Despite being a 72-year-old, she is so energetic and greeted everyone warmly. All the seven contestants sat around her and had a great time. She wished everyone a happy Diwali, but Sreemukhi shockingly asked when Diwali is. Following Bigg Boss’ orders, she didn’t reveal the date but replied that it is going to come soon.

She further stated that she always wanted to see Big Boss and even invited the Big Boss to their house near Masab Tank, Hyderabad. She also spent some time with Varun Sandesh and left the house. Later, Rahul’s mother visited the Bigg Boss house through the confession room. She suggested Rahul participate in all the tasks properly and also sing songs.

Talking to the housemates, she said that Rahul is lazy but is a really good person and will speak straightforwardly without hiding anything. She said Sreemukhi that she loves her naughtiness. Sreemukhi’s mother entered the Bigg Boss house, but Bigg Boss immediately asked her to leave the house. When Sree Mukhi was crying profusely, her mother came back from another door, and Sreemukhi ran and hugged her tightly.

Sreemukhi asked Vithika not to let anyone inside the room and talked with her mother. Sreemukhi’s mother Latha stated that everyone is liking her dance and suggested she stay the same. Talking to Rahul, she said that he is also like a son to him and asked him not to fight with Sree Mukhi and if there is anything they can talk it out. As all the visitors gave the stars, Bigg Boss Hotel task also completed successfully with seven stars, and the Bigg Boss announced that the housemates won this task. dubbed into Telugu. On the career front, Vijay will be next seen in the film World Famous Lover.

The office of Chief Minister Pinarayi Vijayan in increasingly coming under fire in the 30 kg gold smuggling case involving the former PRO of...
Read more
National

As many as 27 women have been rescued from a brothel in the city in a Central Crime Branch police raid on Thursday night,...
Read more