Both BJP, Cong eyeing each other’s MLAs, leaders in MP 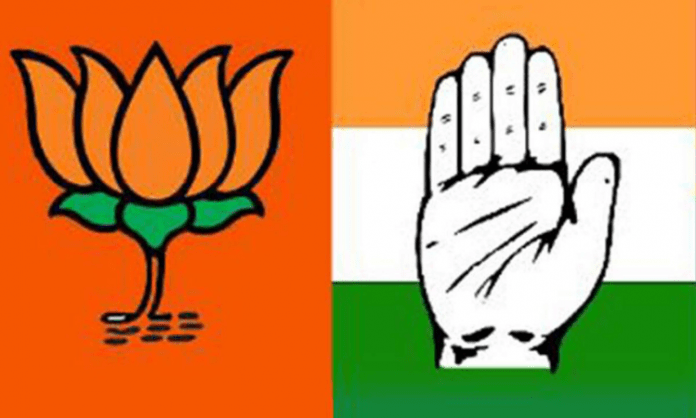 Ever since Shivraj Singh Chouhan returned as the Chief Minister more than three months ago, the Madhya Pradesh politics is in flux, with both the BJP and the Congress trying to woo each other MLAs and leaders.

Not only MLAs, but even their relatives are game for those out to poach politicians in the state, wherein the BJP seems to be at an advantage at present.

On March, 22 Congress MLAs resigned from the Congress along with former central minister Jyotiraditya Scindia, leading to the fall of the Congress government led by Kamal Nath.

Chouhan took oath on March 23 as the Chief Minister for record fourth term.

Madhya Pradesh Congress got another shock when its MLA Pradyuman Singh Lodhi resigned both from the party and from the Assembly membership.

Hours after he joined the BJP on Sunday, Pradyuman was made Chairman of the Civil Supplies Corporation in the rank of a Cabinet minister. Lodhi was a legislator from the Bada Malhera seat in Chhatarpur district.

It is another matter that both the MLAs have asserted that they are in Congress and will remain in Congress. Interestingly, both MLAs are also said to be close to former Chief Minister and former Union Minister Uma Bharti.

Agriculture Minister Kamal Patel claimed that many of the Congress MLAs were in contact with the ruling BJP since they were convinced that the future of the opposition party was dark.

Patel alleged that the Congress had made many promises during the last Assembly elections but failed to fulfill them on coming to power. Due to this, the writing on the wall was clear to the Congress leaders whom, he claimed, people were not even allowed to enter their constituencies.

Political analyst Arvind Mishra pointed out that neither ideology nor any principle guided the political party and hence all of them were busy making attempts to strengthen their respective organizations through whatever means they could.

Amid claims by the Congress that the BJP was busy in horse-trading to strengthen itself in Madhya Pradesh, the opposition party has made Chouhan’s brother-in-law Sanjay Singh Masani as the Vice-President of the state unit of the party and also the coordinator for campaigning during bye-elections for the vacant Assembly seats.

Political observers said that the coming days could witness more political crossovers since there were politicians who could not remain out of power for long and there were others who were worried over their future in the BJP.