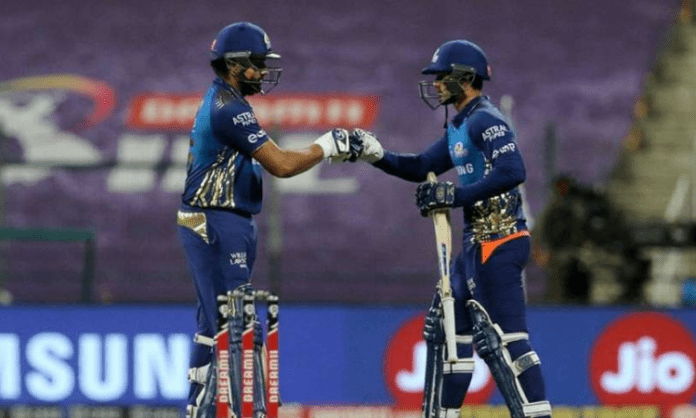 While it was MI’s sixth win from eight games, KKR suffered their second consecutive and fourth defeat overall in the ongoing season. Mumbai now has 12 points — the same as Delhi Capitals — from eight matches. But Mumbai is ahead on the net run rate (+1.353) while Delhi Capitals are second with +0.990.

Royal Challengers Bangalore are placed third with -0.139. All eight teams have now played eight matches, and each team will play six more in the league phase.

MI bowlers came all guns blazing at the Sheikh Zayed Stadium on Friday night as they restricted KKR to a moderate 148 for five wickets in 20 overs, before Quinton de Kock’sunbeaten 78 guided his side home with 19 balls to spare. Mumbai ended up with 149 for two wickets in 16.5 overs.

Chasing the target, openers Rohit Sharma (35) and de Kock took MI to 51 in the initial six overs. It seemed the duo will comfortably steer MI home. However, Shivam Mavi dismissed Rohit in the 11th over when the defending champions were six runs short of the three-digit mark.

Suryakumar Yadav (10) fell cheaply, thanks to Varun Chakravarthy coming up with the second breakthrough in the 14th over.

The late strikes, however, weren’t enough to help KKR in stopping their opponents as Hardik Pandya (21) and de Kock shared a match-winning 38-run (20 balls) partnership to finish things off in just 16.5 overs. de Kock’s unbeaten winnings, which came off 44 balls, was decorated with nine boundaries and three sixes.

Earlier, Pat Cummins (53 not out) and Eoin Morgan (39 not out) somehow managed to take their side to 148/5 wickets after the two-time champions suffered a top-order collapse.

KKR’s new skipper Morgan decided to bat after winning the toss. However, the decision backfired as the top half of his batting lineup was back in the hut with just 61 runs on board in 10.4 overs.

It was Cummins and Morgan’s crucial unbeaten 87-run partnership for the sixth wicket which helped KKR near the 15-run mark.

For MI, leggie Rahul Chahar starred with the ball with impressive figures of 2/18 from his four overs while pacers Trent Boult, Jasprit Bumrah, and Nathan Coulter-Nile picked a wicket each.