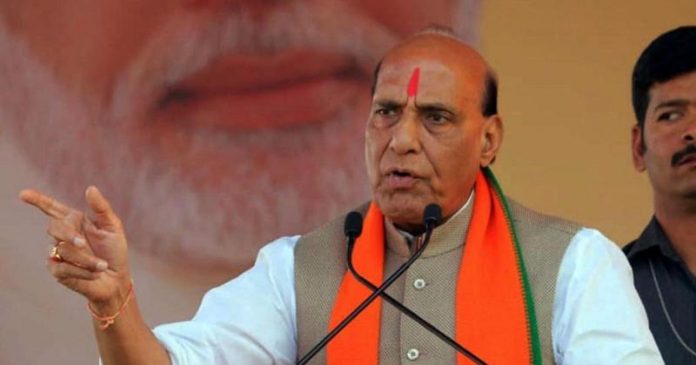 The Indian Army has given a befitting reply to Pakistan on attempts to infiltrate and such actions will continue if the latter doesn’t stop such acts, Defence Minister Rajnath Singh said on Monday.

He said this during a function held here for the inauguration of 1400-ft Col Chewang Rinchen bridge in eastern Ladakh over the Shyok river, the highest-altitude permanent bridge in the country.

In his address, he also asserted that after the abrogation of sections of Article 370 and Article 35A, the Ladakh region will now only “draw friends” and “leave no scope for enemies”. “However, our neighbor Pakistan… Our armed forces have never been offensive on the Pakistani side. We have never done the first firing,” Singh said.

“But, by supporting terror activities, attempts have been made from the other side to destabilize, weaken and compromise the integrity of India,” he said. And, Indian armed forces have given a “befitting reply” to them, he said.

Singh said India has good relations with China and the latter spoke nothing regarding Kashmir during meetings with Prime Minister Narendra Modi and considers Kashmir as an internal issue of India.

Stating that the boundary differences with China are of perception, Singh said both nations share cordial relations and the issue has been handled with great maturity and responsibility.

“India shares cordial relations with China. There are perceptional differences between both the countries on the boundary issue, but the matter has been handled with great maturity and responsibly. Both the countries have not allowed the situation to escalate or go out of hand,” Singh said.

His statement came a day after Army chief General Bipin Rawat said three terror camps have been destroyed by the Indian Army in retaliation to unprovoked ceasefire violation from the Pakistani side at the Tangadhar sector of Jammu and Kashmir.

The bridge built by the Borders Road Organisation (BRO) between Durbuk and Daulat Beg Oldie, and roughly 45km from the Line of Actual Control with China, will reduce travel time by about half, officials said.

Army chief Gen Bipin Rawat, Northern Command chief Lt Gen Ranbir Singh, Ladakh MP Jamyang Tsering Namgyal, and other senior officers were present on the occasion. The bridge has been named after the late Colonel Chewang Rinchen, a decorated officer of the Indian Army who hailed from Ladakh.

“I congratulate BRO for constructing a strategic bridge on road to DBO within 15 working months. BRO is at the forefront of development of the road communication in remote and most difficult areas,” Singh said after the inauguration of the bridge.

The bridge falls at the fag end of the recently completed road connecting Leh with the Karakoram Pass and will allow ease of troop movement to the Daulat Beg Oldi sector in eastern Ladakh. BRO Chief Engineer Nitin Sharma said the bridge was built in a record period of 15 working months after the foundation was laid in 2017.

“It was built with innovative micropile technology used for the first time in Asia,” he said. The bridge is situated at a height of 14600 feet above sea level at 150th-kilometer milestone on 260km-long Leh-BDO road, he said adding it can withstand 70 tonnes of load.

WhatsApp
Facebook
Twitter
Previous articleMan hacked to death on road at Punjagutta
Next article“Support India’s Objectives, But Concerned About Kashmir Situation”: US