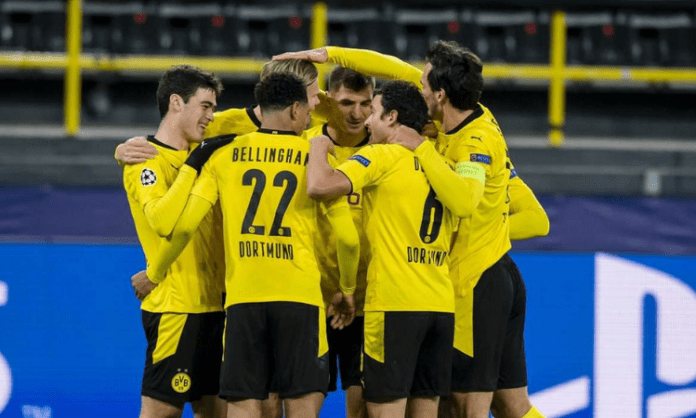 Borussia Dortmund eased past Club Brugge 3-0, thanks to Erling Haaland’s brace in the fourth round of UEFA Champions League group matches.

The “BVB” took the initiative right from the start on Tuesday evening, while Brugge defended deep and looked for counter-attacks, reports Xinhua news agency.

Dortmund broke the deadlock after 18 minutes when Haaland slotted home after Jadon Sancho’s fine build-up work at the edge of the box. The visitors from Belgium showed a vital sign against the run of the play when Ruud Vormer missed the target from a promising position three minutes later.

It remained Brugge’s only noteworthy chance for the remainder of the first half, whereas Dortmund doubled their advantage before the break as Sancho’s well-placed free-kick over the wall found the top right corner from 20 meters. After the restart, Dortmund continued on the front foot as Sancho and Haaland posed a threat in front of Brugge’s goal.

However, Brugge invited Dortmund to score the third goal as Vormer’s misplaced pass inside the box allowed Haaland to wrap up his brace from close range at the hour mark.

Despite having established a three-goal lead, Dortmund should have made it four but Haaland wasn’t able to beat Brugge goalkeeper Simon Mignolet following a one-on-one in the 70th minute. Mignolet remained in the thick of things as he defused Thorgan Hazard’s volley nine minutes later.

“I think 3-0 is the correct scoreline. We just need to go on now. These are things that happen. Now everything is on Zenit. If we win that match, we have the chance to claim third place,” said Brugge captain Vormer.