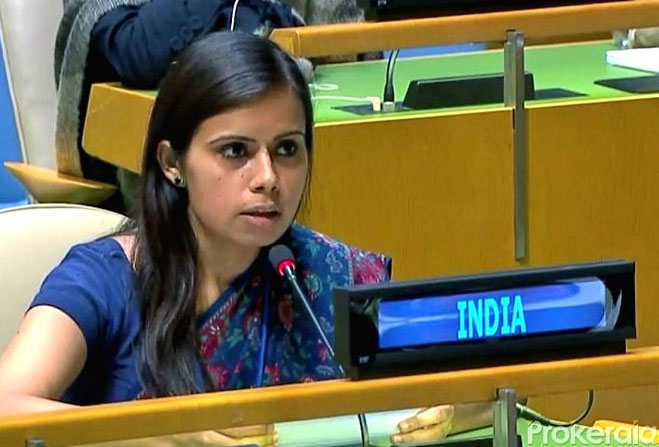 India has once again blamed Pakistan for the venue of United Nations. India afraid of Pakistan, so India has responded to Nawaz Sharif’s accusations. At the United Nation Meeting that the Kashmiri is trying to suppress the people. As the terrorists, Pakistan talking about Indian rights is looking as a foolish in that meeting. Bharat first secretary Eenam Gambhir commented Pakistan as a terrorist they don’t have any rights to talk about India. As by seeing the past history, Eenam Gambhir says that Pakistan is another name of terrorism. Pakistan training the terrorists and exporting to other countries.

To maintain the terrorists Pakistan is spending some billions of dollars. Their politicians providing security for the terrorist leaders. Eenam is angry this is the proof that the Lashkar-e-Taiba (LeT) chief Hafiz Mohammad Sayeed. Now he making a legitimate political party leader in Pakistan. She criticized Pakistan, which means peaceful land now becoming a pure terrorist territory. They give freedom to terrorists to roam on roads. Pakistan has no rights to comment on India, Kashmir to be a land in India. Eenam Gambhir said Pakistan is a failed country, the world has no need to hear speeches about democracy and human rights.

Lucknow, Aug 14 (Uttar Pradesh) Vijay Mishra, the MLA from Gyanpur in Bhadohi district who was booked on charges of grabbing property and intimidation,...
Read more