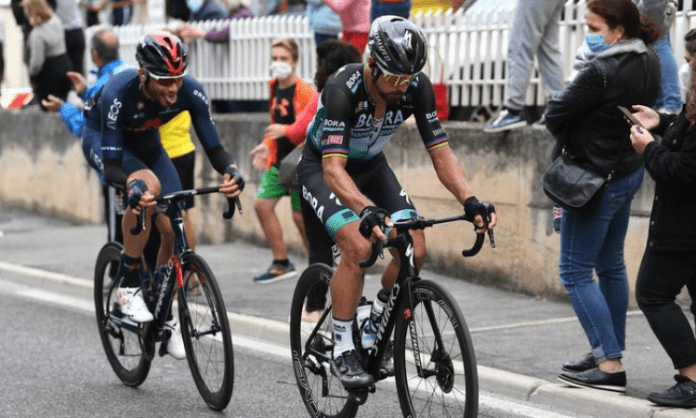 Fresh in the tyre tracks of teammate Richard Carapaz, the winner of last year’s Giro D’Italia, 23-year-old Jhonatan Narvaez became the third Ecuadorian to win a stage of La Corsa Rosa after an epic ride over the undulating training roads of the late Marco Pantani around Cesenatico.

Narvaez’s win on Thursday was helped by an untimely mechanical glitch sustained by his fellow escapee Mark Padun of Bahrain-McLaren, as the Ukrainian required a bike change with 25km remaining of the 204km stage following a broken front wheel on the descent of the fifth and final categorized climb.

The determined Padun time-trialled himself to within nine seconds of the lone leader on the flat run back towards the Adriatic coast – but once the elastic snapped, Narvaez was able to ride clear to win by a yawning gap of just over a minute.

Padun cut a lonely figure as he waved to the crowd to secure a second place, while third went to Australia’s Simon Clarke who was almost seven minutes behind on a day his EF Pro Cycling team called for the Giro, being broadcast on Eurosports network, to be stopped early after 11 positive Covid-19 tests across five teams on the first rest day.

Victory for Narzaez was a third for Ineos Grenadiers following a brace by the Italian FilippoGanna as the British team continued their positive response to the disappointment of losing team leader Geraint Thomas to injury in the opening week.

“I’m really happy. In the last days, I tried to get into the breakaway but it was too difficult and the peloton was too strong. Today it was again the same but I was able to get up the road and I’m so happy to win from the break,” said Narvaez.