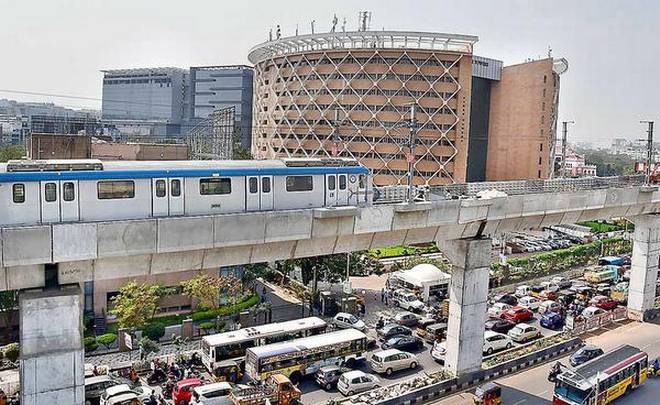 The stretch of the Hyderabad Metro Rail between Hitec City and Raidurg is all set to be thrown open to commuters, as authorities have finished conducting all test runs and are ready for safety clearance.

The stretch covers a crucial part in the heart of the city’s IT corridor, where several multinational corporations (MNCs) are located.

In March this year, the much-awaited metro service on the Ameerpet-Hitec City route was inaugurated, to cater to thousands of techies who travel to the IT cluster.

The inauguration also completed the 27 km Nagole-Hitec City corridor, one of three in the project. The 16-km Ameerpet-LB Nagar line was inaugurated in September last year, while the 30-km stretch between Uppal and Miyapur has been operational since November 2017.

Earlier this week, the metro authorities said that they would soon begin trial runs on Corridor II on the 10-km stretch between Jubilee Bus Station (JBS) to Mahatma Gandhi Bus Station (MGBS) via Parade Grounds. Once completed, the entire metro project would be thrown open to the public.

Billed as the largest Metro project in the world in the Public Private Partnership (PPP) model, the Rs 14,132 crore project is being built by infrastructure giant L&T.

Bank of India on Monday reported over a five-fold increase in its consolidated net profit for the April-June quarter at Rs 845.78 crore. During the...
Read more
Business

Covid-19 induced economic turbulence pulled down two-and three-wheeler manufacturer Bajaj Auto's total sales in July by 33 percent on a year-on-year basis. According to the...
Read more