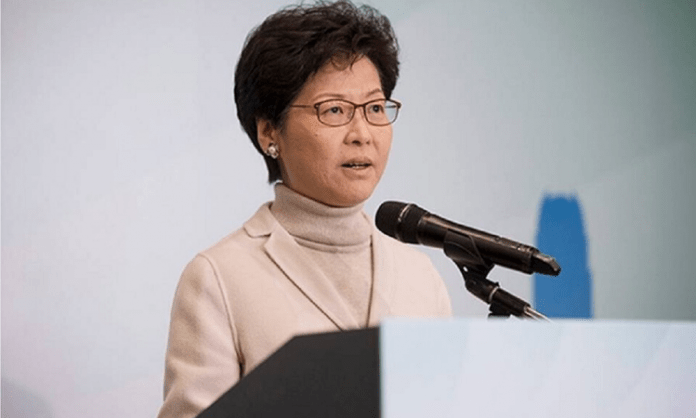 Hong Kong Chief Executive Carrie Lam said on Tuesday that she was not kept in the dark as China imposed the national security law on the city, and central government officials had briefed her and sought her opinion on the legislation.

“The National People’s Congress Standing Committee has listened to opinions, including that of myself and the city’s government,” the South China Morning Post (SCMP) newspaper quoted Lam as saying while briefing reporters here.

The city’s chief believes that the remarks she made two weeks ago fuelled the misrepresentation of her relationship with Beijing over the drafting of the new law.

“I answered a question here, and (the reporter) assumed that I know nothing,” she said.

“I only answered that at the moment, ‘we have not seen the complete details of the proposed legislation’. This was used to suggest that I know nothing about the law, and have not seen any provision until the law was passed on June 30.

“This was really far from what I meant, and (those critics’) ability to imagine and exaggerate things really impressed me,” Lam added.

At the presser, she also said the police’s power was not expanded under a series of new implementation rules laid down by the government the day before.

Under the new rules, Hong Kong police can raid premises without a court warrant, order internet firms to remove content or seize relevant devices, and demand information from political groups operating outside the city.

But Lam said the law had been misrepresented as being draconian and undermining “one country, two systems”, the principle under which the city is governed reports the SCMP newspaper.

Rather than enlarging police power, the implementation rules were meant to limit such powers in law enforcement, Lam said.

Beijing drafted and passed the legislation last late month that targets acts of secession, subversion, terrorism, and collusion with foreign forces, with punishments of up to life in prison for the most serious offenses.

It came into effect on July 2.

The move came after months of social upheaval triggered by opposition to a now-withdrawn extradition bill but that morphed into wider demands, including universal suffrage.

Mainland Chinese and Hong Kong authorities have repeatedly stressed the law targets only a minority of residents and that the freedoms of speech and assembly will be protected.

An aggressive wildfire near Los Angeles that has already burnt 10,500 acres with zero percent containment, was threatening more than 5,000 structures, authorities said. As...
Read more
International

US President Donald Trump said that he plans to deliver his convention speech while formally accepting the Republican presidential nomination from the White House...
Read more
Health

New Zealand reported 12 new coronavirus cases on Friday, all linked to an Auckland family cluster, amid the second and stronger wave of the...
Read more