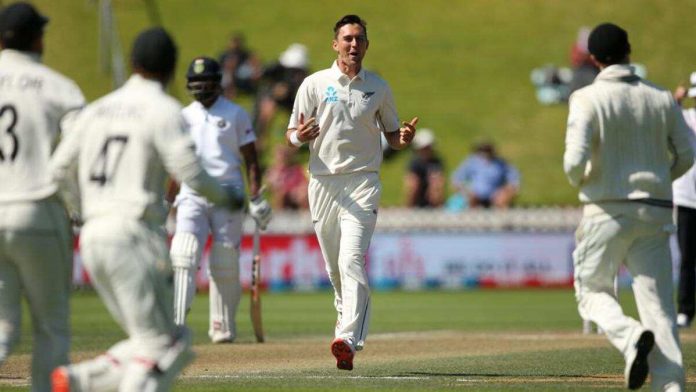 Trent Boult and Tim Southee squashed expectations of a big Indian recovery initial into the fourth day’s action to power New Zealand to a large 1-0 lead in Wellington – and also their 100th Test victory. The big result – a win by 10 wickets – was a culmination of thorough domination across each of the four days as they didn’t allow the No.1 Test side in the world any breathing space to make their way out of a tricky situation on multiple occasions.

India began the day on 144 for 4 with all hopes resting on Ajinkya Rahane’s shoulders, but that lasted all of 13 balls. Rahane departed first and then India stuttered to 162 for 7, running a real risk of suffering an embarrassing innings defeat. Rishabh Pant and Ishant Sharma somehow dragged India out of that quandary but surrendered soon to set New Zealand a target of nine runs.

Rahane and Hanuma Vihari resumed their 118-ball alliance with the need to double – or maybe even triple – that figure if India were to stand a chance of heist. What they ran into instead was a prime Boult and Southee with several ‘setting up’ tricks up their sleeve. It took Boult just seven balls to Rahane to switch the angle and strike straightaway. The left-arm bowled from round the stumps to the right-hander and once again used the crease with great effect. The natural inward angle on the length ball and the impeccable line forced Rahane to commit on the front foot, and he ended up poking the ball to BJ Watling.

Southee then used the oldest trick in the book – two away swingers followed by one that moved in late – to breach Vihari’s bat-pad gap and leave India tottering at 148 for 6. Ashwin had a second chance of the match to re-enhance his all-round abilities but came up short once again. The first innings dismissal – off a ripping, pitched up away swinger from Southee – was still playing on his mind as he kept playing for the movement away from him.

Southee got one to jag back in late and struck Ashwin on the front pad. Though it looked like a decision that could go either way, Aleem Dar raised his finger immediately on appeal and Ashwin curiously, decided against reviewing it. A review wouldn’t have made a difference to the decision, though, as the replays showed that the ball would’ve just about hit the leg stump.

Ishant Sharma tried to take a leaf out of Tim Southee’s batting book – clearing his front foot and play flat-batted hits in the company of Rishabh Pant. The pair somehow avoided the ignominy of an innings defeat – which would’ve looked dire considering India began the day with a deficit of just 39 runs and had six wickets in hand.

That though was a very small consolation, as Rishabh and Jasprit Bumrah became Southee’s fourth and fifth victims of the innings in the first over with the new ball.

Tom Latham and Tom Blundell finished the custom in the second over for a breakthrough victory at the Basin Reserve.