It is like Lord Krishna visiting poor Kuchela: K. Vishwanath 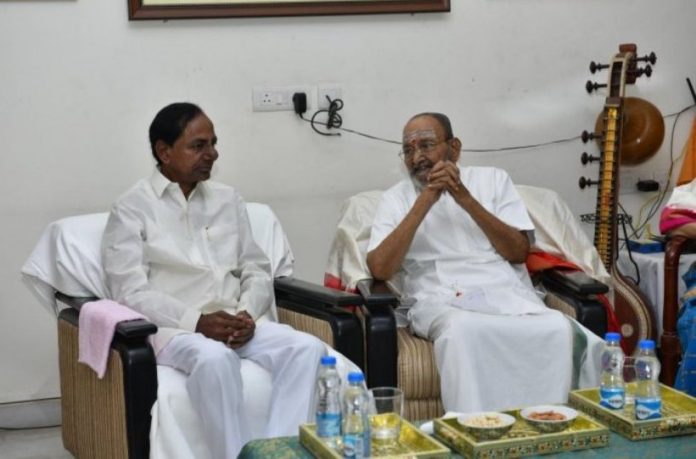 Film Nagar/Hyderabad: CM KCR passionated towards Telugu literature and loves Telugu movies.
Telangana CM KCR impressed with a song from Veteran director K.Vishwanath movie met him personally and shared his thoughts with K. Vishwanath. CM KCR sought permission from K.Vishwanath visited home.
CM KCR urged him to direct a movie because it been a decade since Vishwanath directed a film. KCR then offered silk cloths to the director and wife and inquired about the ace director’s health.
“If you want to make a movie let me know. I will take care of everything else,” KCR told the director.  K Vishwanath expressed gladness over CM KCR talk.
“It is like Lord Krishna visiting his childhood buddy, poor Kuchela,” the director told reporters after KCR left.
The Chief Minister’s office in a statement said that the Chief Minister is keen on making Hyderabad the best destination for movie making.

Actor Robert Pattinson said he lied to filmmaker Christopher Nolan to make it to the screen test for a superhero film, The Batman. In an...
Read more
Cinema Latest

Lili Reinhart on her decision to come out as bisexual

Actress Lili Reinhart said she was attracted to women from a young age, and people close to her knew her truth all along. In an...
Read more
Cinema Latest

ED grills Rhea’s brother; both to be quizzed again on Monday

Continuing its probe in the Sushant Singh Rajput case, the Enforcement Directorate (ED) has grilled Showik Chakraborty, brother of actress Rhea Chakraborty, for the...
Read more