Jagan’s First Tweet After The Attack Relaxed His Fans 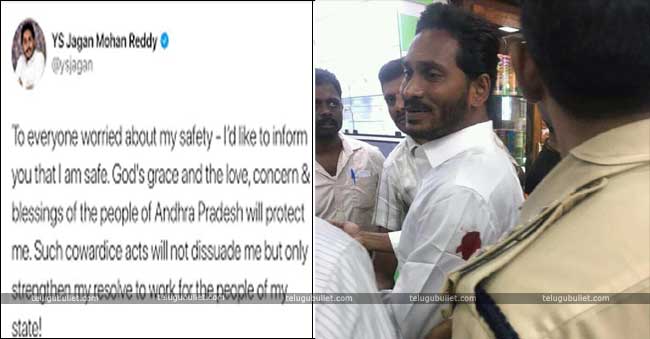 The YSRCP Chief Jagan Mohan Reddy got attacked by his ardent supporter yesterday at Vizag International Airport. Post the attack, Jagan took the first aid there itself and left for Hyderabad on a flight.

As soon as this incident spread like wildfire via media and social networking sites, YSRCP activists and Jagan’s fans reached the capital Hyderabad to make sure their leader is fine. Post his treatment at Hyderabad, Jagan took his official Twitter to handle to declare his safe and sound health. He stated that God’s grace, AP people’s love, concern, and wishes would protect him always. Not stopping there, this Opposition leader claimed that such cowardice acts would not stop his fight to serve the AP people via Politics.

Meanwhile, the Police heads formed a SIT and started probing into this issue. The culprit Srinivas who is a resident of Amalapuram did this for personal publicity according to the Police circles. DGP Thakur recovered a nine pages letter from the attacker and he was declared as a hardcore fan of Jagan. For now, Jagan’s tweet has suppressed YSRCP cadre’s wrath otherwise they plan to bring unrest in AP with their strikes.