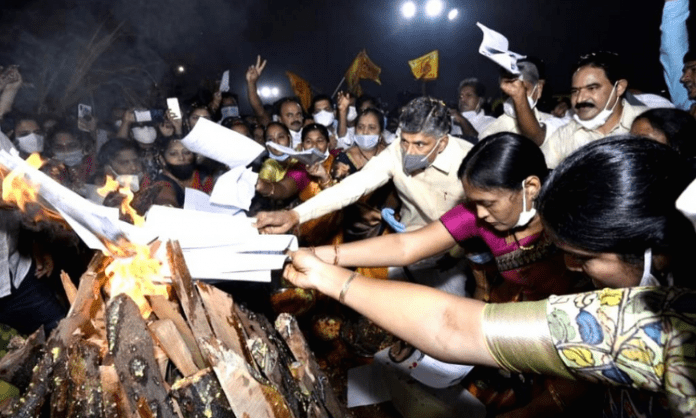 The customary event to burn old wood on ‘Bhogi’, which symbolizes burning of the old and ringing in the new, was shared on social media in the early hours of Wednesday.

A large number of TDP activists were in attendance at the event as Naidu was welcomed by some priests. Joining TDP supporters, Naidu also tossed order copies into the fire.

The TDP supremo later alleged that people could not celebrate Sankranti, the biggest Hindu festival in Telugu culture, last year because of the news about the trifurcation of the state capital.

“After a series of cyclones, heavy rains, and floods, farmers suffered losses but the government did not rescue them, taking the sheen off Sankranti celebrations this time also,” claimed Naidu.

The former Chief Minister alleged that the festivities suffered this fate for two years as the Yuvajana Sramika Rythu Congress Party (YSRCP) was in power.

“As rulers do not have the resolve that people should be happy, these kinds of things are happening. I wish prosperity to farmers this year and extend my Bhogi greetings,” he added.