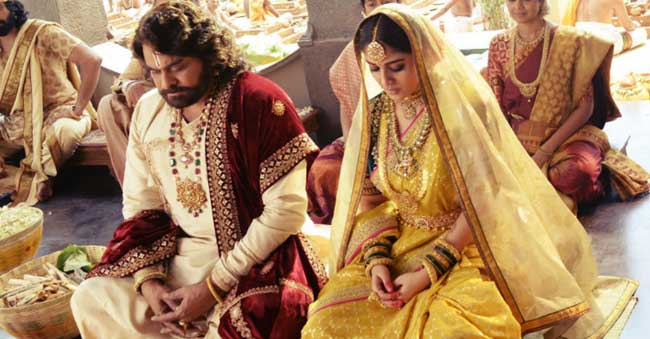 The ongoing biggie of megastar Chiranjeevi’s most hyped historical project Sye Raa is going in a decent pace. A recent update from the production team states the current status of the ongoing schedule.

With massive settings and well-designed sets, the regular shooting of Sye Raa is currently on and the lead cast is participating in the present schedule. As the sets are big and expensive, the production team selected an area on the outskirts of Hyderabad city not to have any disturbances. But the sudden change in atmosphere and advancement of Monsoons resulted in heavy rainfall which is apparently affecting the regular shooting of this flick.

Some of the sets are said to be washed off and the stars are confined to their caravans as the shooting in rain is almost impossible. The makers are hoping for the clear weather to continue the regular shoot. After finishing a big action schedule, the leads Chiranjeevi, Tamannah, Nayan and other main characters are canning some flashback scenes. Kannada superstar Kiccha Sudeep just joined the sets for a crucial role. Meanwhile, Chiru and others are checking the shot footage in order to correct if there are any extra scenes to save the post-production time.

This movie is bankrolled by Ram Charan Tej with a whopping budget of 150+ crores of rupees. Star cameraman Ratnavel is cranking the camera and stylish director Surender Reddy is holding the megaphone. The flick is expected to hit the silver screen for next year’s Summer.