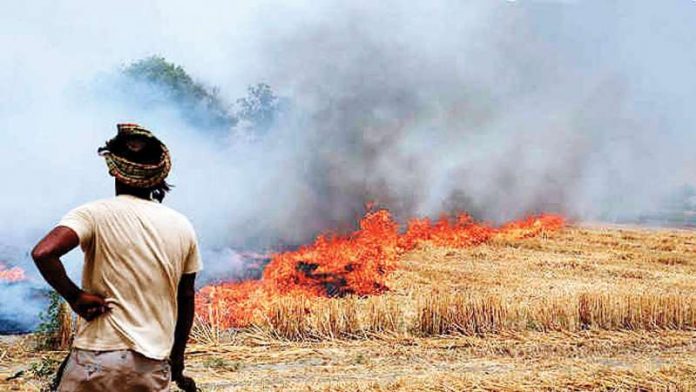 The Punjab government was roasted by the Supreme Court today for its inability to control stubble burning by farmers. Accusing the government of failing to provide a roadmap and leaving it all to officers, the court said, “The time has come to punish officers”. As the government’s representative, the Chief Secretary bore the wrath of the court, which squarely told him it was his failure. “Is this way? We will suspend from here. Why are you the Chief Secretary of Punjab? It is your failure,” the court said.

“People are dying. 1800 is the level of pollution. Flights are diverted. You are proud of your achievement,” said the two-judge bench comprising Justices Arun Mishra and Deepak Gupta, while hearing the plea of pollution control body Environment Pollution Control Authority or EPCA against stubble burning.

Smoke from the stubble burnt on the farmland of Punjab and Haryana is the chief component of the smog that chokes Delhi and its neighboring areas. This year, it has spread over much of north India.

Despite the court’s Monday’s order to Punjab and Haryana governments to extinguish stubble fires, a record 7000 fires were detected on Wednesday by SAFAR, the Ministry of Earth Sciences’ air quality monitor.

Pointing out that the government’s inaction is placing the onus on farmers, who are being challaned in Haryana for stubble burning, the court said no nation permits stubble burning.

“You want poor farmers to be punished. Punishment of farmers is not a solution,” the court said, accusing the officers of “sitting in ivory tower and ruling the state”.

You are responsible and the entire Punjab, Haryana, UP and Delhi are responsible for this. Nobody bothered about the poor citizens of the country… We are going to haul up entire machinery,” Justice Mishra said.

Earlier, the court had reprimanded the Attorney General as well. At the hearing attended by the Chief Secretaries of the Centre, Delhi, Punjab, and Haryana, Attorney General KK Venugopal had said 44 percent of the polluting haze that’s sweeping over north India comes from stubble burning.

The court rejected his suggestions that it is not possible to control 200,000 farmers who burn stubble. “If stubble burning is the only way then this is the end… Stubble burning has to be controlled and inability to do that will take the country back by 100 years,” the court said.

“Farmers say it will affect the livelihood and they have no other way,” he said. “If Haryana can control it (stubble burning), why not Punjab? Nobody tried organic means,” the court shot back.

WhatsApp
Facebook
Twitter
Previous articleWhen will Anushka tell that sweet news?
Next article“There is no way Dhoni can commentate,”: Source