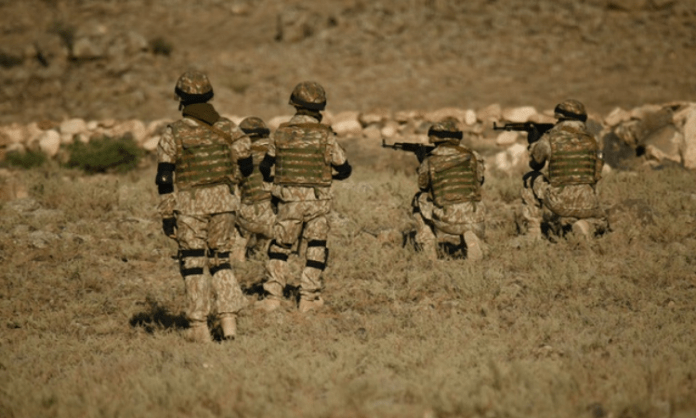 Barely 48 hours ahead of the start of DDC polls in Jammu and Kashmir, two soldiers were killed in a terror attack in broad daylight just outside Srinagar on Thursday, officials said.

Terrorists in a car fired indiscriminately on an army patrol at Shariefabad on the Srinagar-Baramulla Highway, critically injuring the two soldiers who later succumbed. The attack came on the 12th anniversary of the Mumbai 26/11 attack.

Jammu and Kashmir Police’s Special Operations Group (SOG) and CRPF Valley Quick Action Team (QAT) rushed to the spot to cordon off the area and nab the attackers.

The Army, in a statement, said terrorists fired indiscriminately at its Quick Reaction Team (QRT) in which two soldiers were killed but troops maintained restraint to avoid collateral damage.

“Two soldiers were critically injured and were evacuated to the nearest medical facility. However, they have succumbed to their injuries. The area has been cordoned and search operation is in progress.”

Inspector-General of Police, Kashmir Range, Vijay Kumar said that three terrorists traveling in a Maruti car carried out the attack on an army patrol. He said two of them could be Pakistani terrorists and one local terrorist.

“Three terrorists were traveling in a Maruti car. Two of them were carrying weapons, two of them could be Pakistani terrorists and one local terrorist,” he told reporters.

The IGP said there is the movement of Lashkar-e-Taiba and Jaish-e-Mohammad terrorists in the area and by evening, the terror outfit responsible will be identified.

“We will identify the terror outfit responsible for the attack by evening,” he said. Security forces have been getting inputs that terrorists have been planning attacks to disrupt the District Development Council (DDC) elections.

On November 19, four terrorists traveling in a truck have been killed during an encounter on the Jammu-Srinagar National Highway near Nagrota in the Jammu region.

The four Jaish terrorists had infiltrated into India through the international border in Samba and were traveling in a truck that was intercepted by security forces at a toll plaza near Nagrota.

WhatsApp
Facebook
Twitter
Previous articleExpected GST improvement due to traction in economic activity: SBI Ecowrap
Next articleNushrratt Bharuccha on ‘Chhorii’: Excited, nervous, charged up for this one