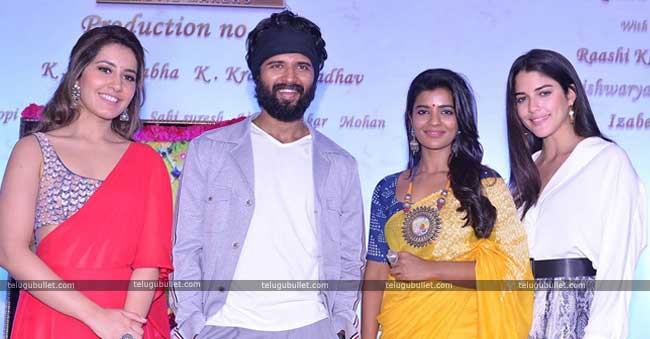 Vijaya Deverakonda has started his new project under the banner of Creative Commercials Movie makers. Kranthi Madhav is the director of this film and K.S.Rama Rao is the producer of this film. In the past, Kranthi Madhav did Malli Malli Idi Rani Roju movie under this banner and it is the second one. As well as, Rashi Khanna, Aishwarya Rajesh, and Izabelle De are the heroines of this film. For the first time, Vijay Deveraokonda coming one more heroin. Moreover, Rashi Khanna is pairing with Vijay first time and this is the first straight movie for Aishwarya Rajesh. As well as, Izabelle De is a Brazillian model and she did three films in the Hindi language.

The movie is launched this evening and pooja ceremony held in the evening. To the launching event, T.Subbi Rami Reddy, Allu Aravind, Ashwini Dutt, K.Raghavendra Rao, and Nag Ashwin have attended. Of course, Allu Aravind and Ashwini Dutt are the future producers of Vijay movies. Means, they are the producers of Vijay’s next projects. Come to the movie details, there is no hint about the movie title but this will be a love story, said director Kranthi Madhav. 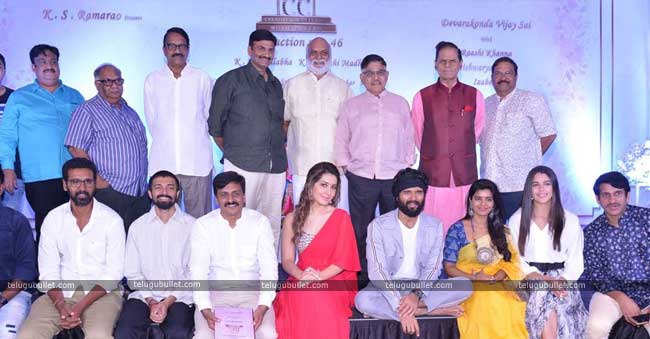 Generally, Kranthi Madhav movies are very classy and calm, but our hero is not like that right. So, will see this crazy different combination. And, Kranthi Madhav made Malli Malli Idi Rani Roju, Onamalu, and Ungarala Rambabu movies. Albeit, one is about society, one is about love and another is about comedy. So, we can expect different genres from Kranthi Madhav, according to his track record. Finally, Vijay Deverakonda started his new movie, and Taxiwala is on processing so it will be released soon. Moreover, Vijay with three heroines and especially with Rashi, so something big is hidden behind this. 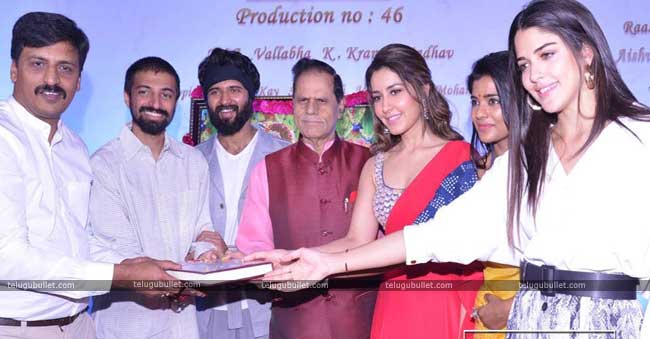 Actress Rhea Chakraborty has shared that she will never come to terms with actor Sushant Singh Rajput not being around anymore and said she...
Read more
Uncategorized

The Kashmiri singer-songwriter Rahi Sayed is quite overwhelmed by the response to his new single "Sarmast". He says, coming from a place like Kashmir,...
Read more