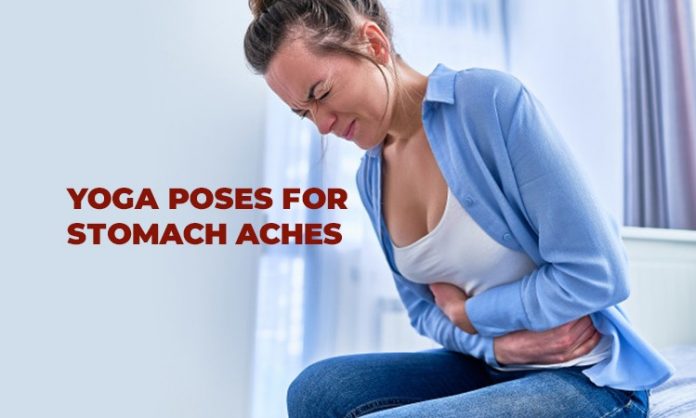 People do often eat more than required particularly on holidays. They stuff their stomach with rich foods in greater quantities. Naturally they end up with a stomach ache after having eaten foods such as salami and crackers, spicy salsa, and a glass of eggnog in one go? One suffers from severe stomach pain after eating too much food.

Yoga combines deep breathing, stretches that massage one’s organs, and twists that wring out intestinal toxins. These poses can be done daily as part of one’s routine in order to get rid of stomach pain.

This pose massages one’s abdominal organs in order to stimulate one’s digestive as well as reproductive systems and thus help in getting rid of stomach ache.

To start, get on one’s hands and knees checking to make sure that one’s hips are over one’s knees and one’s palms are beneath one’s shoulders. On an exhale, lower the head and look towards one’s belly button as one rounds the back. As one inhales, arch the back and lift the chest, pulling one’s shoulders back. Look forward and tighten one’s stomach muscles. Repeat this several times and enjoy the release in one’s lower back.

The pose compresses the ascending and descending colon in order to stimulate the nerves and aid indigestion. This pose presses on the abdomen in order to release any trapped gas in the large intestine and relieves constipation and thus one gets relief from stomach ache. Lying on one’s back, bring both knees to the chest and wrap the arms around the shins. Pull the knees toward the chest and bring the chin toward the knees. Hold this pose and release before repeating. One can also bring one leg toward the chest at a time to stimulate one side of one’s colon at a time.

The downward-facing dog pose actually compresses one’s kidneys, liver, and spleen which aids in digestion. As one is in the pose, pull the belly button towards the spine for abdominal compression. To get into this pose, come into plank and ensure the hands are stacked under one’s shoulders and one’s feet are hips-width apart. Using the core, press the hips up and back, so that the hips are in the air while one’s hands and feet push into the floor. If one has tight hamstrings one can bend the knees and stretch out the back of the legs. This asana also help one to overcome stomach pain.

This twisting pose aids massage of one’s organs to get the juices flowing. Breathing deeply while holding this pose will indeed help cleanse as well as purify one’s inner organs. With one right leg forward in Triangle Pose, take the right hand from one’s right shin and stretch it toward the ceiling as one takes one’s left hand to one’s right shin. To go deeper one can bring one’s left hand outside one’s right foot. Hold this pose for one minute before switching sides.

This pose not only stretches out one’s legs and alleviates back tension, but it also helps improve digestion as it tones up the pelvic organs. There is a slight twist, which does help get the food in one’s stomach moving. Step the right foot 3-4 feet in front of the left. The right foot should be facing forward, while the left foot can slightly face out. Both feet need to be fully on the ground with legs straight. Reach the right hand and rest it on the right shin, keeping the legs straight. Reach the left hand toward the ceiling. If one has to have the balance, look toward the left hand to get a nice twist in the lower back and internal organs. Hold for one minute before switching sides.

As the number of samples collected for testing has gone down in the past few days, the daily tally of Covid-19 figures has also...
Read more
Health