Power Star Pawan Kalyan and ‘wizard of words’ Trivikram, who previously gave blockbuster hits like Jalsa and Attarintiki Daredi, came up with their third instalment, ‘Agnyaathavaasi’. Various rumours and incidents prior to the film’s release further increased the hype around the film. Be it Katthi Mahesh, Largo Winch, or even Pawan Kalyan’s political stance, all these thrust the film’s craze to sky-high.

The film’s tag, ‘Prince in Exile’ sums up the story in one line. Govinda Bhargav (Boman Irani) and his son are killed by their rivals, in a bid to take over their company. Little did they know about another heir, Abhishikth Bhargava aka AB (Pawan Kalyan). AB joins in their own company as an employee, in an attempt to find out who killed his father and brother. What is Indrani (Kushboo) to AB? Who killed Govinda Bhargav? Did AB find the culprits? To find, watch the movie on the big screen.

Leaving aside the ‘inspiration’ from Largo Winch, Trivikram falls flat throughout the film. The screenplay and script are run-of-the-mill. The film is clearly a one man’s show, and don’t be surprised to see PK almost in every frame. Though the concept of raising an heir away from the money-ridden world seems striking, Trivikram fails to establish the character development of the heir.

One wonders why the heroines even exist in the first place, given their highly-limited screen presence. The director fails to continue an interesting point, between the two heroines, in which a heroine narrates a problem as if it is her problem to impress the other heroine. The routine slapstick comedy further weakens the script. There is hardly any build-up between the hero and the villain in the movie. All you have is a repetitive story, with heroines’ serving their glamour and irritating slapstick comedy.

Apart from a few trademark dialogues, Trivikram has failed miserably in direction, narration and script work of the movie. Looks like Trivikram has taken the Telugu audience for granted this time.

The only saviour in the film is a couple of comedy scenes, and performance of Pawan Kalyan. The action sequences can be remembered, only if you did not watch Largo Winch. By all means, this is the weakest film in Trivikram’s career, and surely a disappointing one by Pawan standards. Shockingly, it takes more time to remember the character’s names, then their screen time.

Telugu Bullet Punchline: Agnyaathavaasi loses his way, thanks to 3Vikram

Is Mass Maharaja The Next ‘NRI’ Hero? 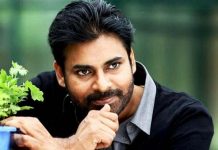 Will ‘Agnathavasi’ be the last movie for Pawan Kalyan?

Trivikram working hard for his next with Tarak

Pawan Kalyan with his sons at Shabdalaya Studio!