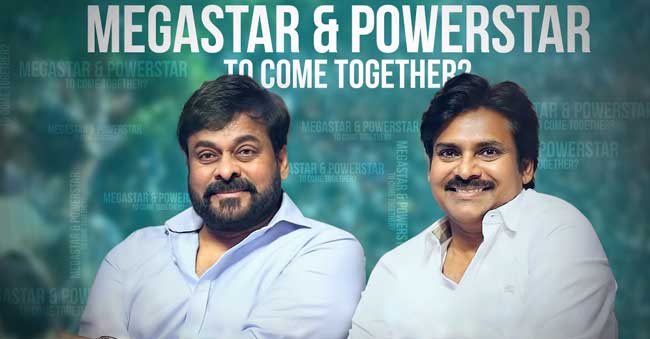 If there exists a father of all multi starters in Telugu Film Industry, then it should be the most awaited combinational multistarrer of Chiru and Pawan Kalyan. For those fans who are waiting eagerly for this flick to be happening, seniormost movie analysts are here to discuss the level of possibility in brief.The first speculation of this multistarrer came up when the celebrity Politician T Subbarami Reddy announced this project officially. He declared that the multistarrer is ON and will bankroll within a year with high budget.

It’s been more than a year and still there is no development regarding this project. The other day, the mega producer Allu Aravind two disclosed his dream of bankrolling the multistarrer of Chiru-Pawan. Aravind with rather a confidence declared that he would make this project happen at any cost doesn’t matter what it takes to get materialized. Also he wants a big director like Trivikram or Rajamouli to helm this mega multistarrer.In reality, if we look at the current scenario, this project is not so easy to get materialized.

The megastar Chiranjeevi is busy with the Sye Raa and it would take at least a year more for him to become free. On the other hand, Pawan Kalyan left Cinema for Politics and he is not even taking care of his health for his tours. So it is almost impossible for Pawan Kalyan to allow his dates for a movie. However, one thing can be done exclusively for the mega fans. Likewise, Shankardada series where Pawan did cameos in Chiru’s flick, Pawan Kalyan can do an extended cameo in any of Chiru’s future flicks after the Sye Raa. For now, the mega fans crossed their fingers doing nothing but waiting for an official announcement.