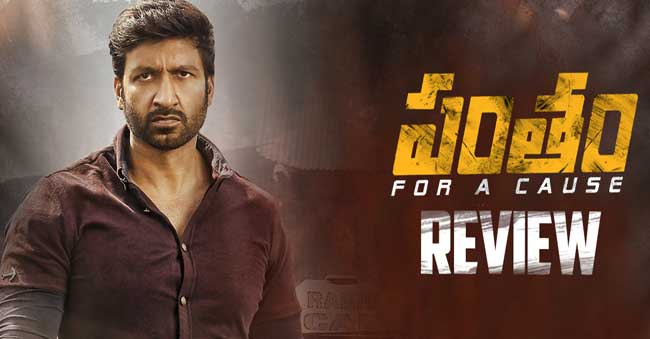 Gopichand has not scored a solid hit post the flick Loukyam. He has come up with the flick Pantham under the director Chakri who worked as an associate for the superhit flicks like Power and Jai Lava Kusa pairing with Mehreen. Touted to be an action thriller, this movie grabbed some pre-release buzz right from the day of its announcement. Theatrical trailer and release promos created a huge positive impact on the movie lovers. Let us see if this hard work from the team of Pantham gave a hit to the macho hero Gopi or not.

Reason for Gopichand’s “Pantham” ( Story): Vikranth Surana ( Gopichand) is a professional thief who loots the house of bigshots and rich people in the region. On this note, he robs the black money from the houses of Home Minister Jayendra ( Sampath) and Health Minister (Jayaprakash Reddy) in this process along with many other political leaders. Gopi and his gang gets caught to the Home Minister while he is robbing money from his girlfriend’s house and finds very crucial details about Vikrant which will leave him in shock. Then he discovers the fact that Vikranth is none other than the only son of one of the world’s richest man Surana group MD. the rest of the story revolves around why Vikranth is robbing money despite being the son of a rich man, why is he only targeting corrupt Politicians and his motto.The director indirectly reveals that the story is not a new one via the main lead role

Story of the Movie:

Government would provide certain amount to the deceased accident victims in the name of ex-gratia. The theme plot of the story revolves around this concept. The director took this point to have a brief concern of this amount being reached to the victim’s families or the middle people like Politicians and Government officials taking away this money. He added commerciality to this theme along with some cinematic liberties to have maximum impact. This type of role is said to be a tailor fit for Gopichand’s image and he did excel in his role as Vikranth Surana. Main antagonist’s role could have been better. Even though Gopi Sunder gave decent tunes, the way they picturised acted as speed breakers to the exciting plot. However, he excelled in the Rerecording in crucial scenes. Despite being directing the first time, maker Chakri’s attempt of delivering a social message sugar coated with commerciality gets good marks. However, he failed to keep the first half as exciting as the second half. Writer Ramesh Reddy’s dialogues were top notch especially the courtroom scene words stand as a highlight. Prasad Murella’s Cinematography is an added attraction. Producer Radha Krishna’s production values are very lavish and every frame appeared rich.

Gopichand has been suffering with a series of flops and he is very hungry to score a hit. Pantham is one such opportunity for Gopi to have a feast showcasing his talent. With the experience of working as a main associate, the maker Chakri’s execution worked magically. The way he handled Gopi’s character with extra care did wonders on screen. Even though there are some boring scenes here and there, the final social message got delivered at the end without dragging. Apart from commerciality, the Political angle added new flavour to the flick. Being the 25th flick of this macho hero, he kept no limits to his talent. Gopichand excelled in dialogue deliveries and fights compared to the past. His acting skills in courtroom will thrill the fans. Mehreen’s role got limited to glamour and songs. Comedian Prudhvi entertained with his comedy timing in the first half. One gets a feeling that the director forcefully induced his comedy into the story for the sake of entertainment. Srinivasa Reddy, as usual, gave his best being hero’s best friend. Rallapalli, Ajay, Hamsa Nandini, Sayaji Shinde and others gave their maximum for their respective roles. 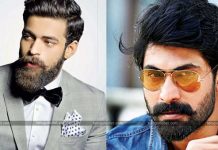 I’ll Marry Only After The Wedlock Of Rana: Varun Tej 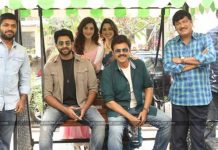