Cong is finished in MP, BJP will win all seats: Bharti 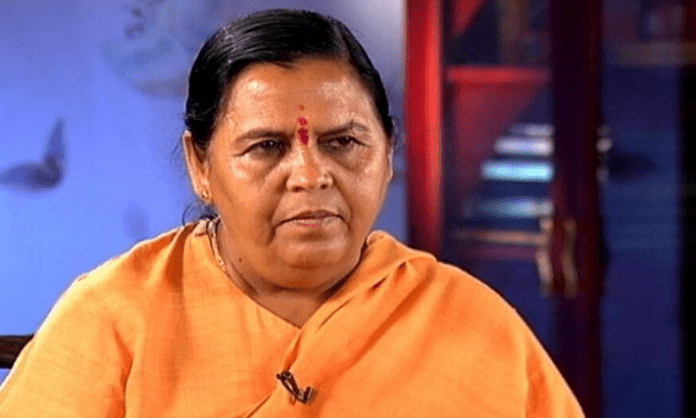 Bharatiya Janata Party (BJP) national vice president and former Union Minister Uma Bharti has claimed that the Congress in Madhya Pradesh is finished and the BJP will win all the seats in the upcoming assembly by-elections.

The former Madhya Pradesh Chief Minister was in Lucknow to record her statement in the Babri mosque demolition case.

Talking exclusively to IANS, Bharti said, “In Madhya Pradesh, many Congress leaders have joined hands with the BJP, so there is no opposition left there. The BJP will win all the 24 assembly seats that will go to polls soon.”

Bharti was earlier reported to have been miffed over caste equations in the Shivraj Chouhan cabinet expansion. She is said to have expressed displeasure that her suggestions had been ignored but later said that she only spoke about the social imbalance in the cabinet.

On this issue, she said that she has spoken to Chief Minister Shivraj Singh Chouhan and state BJP president B.D. Sharma. They will try to find a solution to the issue, she said.

Asked if she is in political exile, Uma Bharti said, “I have not been in exile at all. I am the BJP’s national vice president. I decided not to contest elections in 2019. Why do you think the only fighting elections is the only way to be in politics?”

On contesting elections in the future, she said, “I had announced not to contest the 2019 elections and then had also said that I will contest the 2024 general elections. I never said I will not contest.”

Uma Bharti and Sadhvi Ritambhara had played a very active role during the Ramjanmabhoomi movement. On the question of participation of women in the Ram temple trust, Bharti said, “The trusts are not formed on the basis of gender, they are for a goal. How does it make a difference, the trust is for Lord Ram. I do not mind it. There are seers and saints in it. I have no objection to it.”

To a question on what changes she sees in the politics of Madhya Pradesh after Jyotiraditya Scindia joined the BJP, the senior BJP leader said, “We already are a big party in Madhya Pradesh. Scindia’s arrival made a difference to the Congress, which is now finished in the state.”

Asked whether her political experience has benefited the BJP in Madhya Pradesh and if she gives advice to Shivraj Singh Chouhan, the 61-year-old BJP leader said, “I have not come to that age yet, I am younger than Shivraj. But, if they come asking for advice, I am always there.”

On the question as to who is the best in her eyes among the chief ministers of BJP-ruled states, she said, “Will you make us fight? I won’t tell you. That is my answer.”

On being reminded about her pledge to clean the Ganga which is still very dirty, the former Union Minister said that all the projects of Nirmal Ganga have stopped due to the lockdown. The Sisamau drain, the largest drain in Kanpur and the most notorious for polluting the Ganga, has been closed. “The sacred river will be cleaned in three phases – the first phase is of 3 years, the second for 7 years and the last phase will be of 10 years. There is no dearth of funds. Prime Minister Narendra Modi himself is taking a keen interest in it. That is why he has created a separate ministry,” she said.

In response to another question, Bharti said a grand Ram temple will be constructed in Ayodhya. The whole country is very happy about this. It is a matter of great pride, she said.