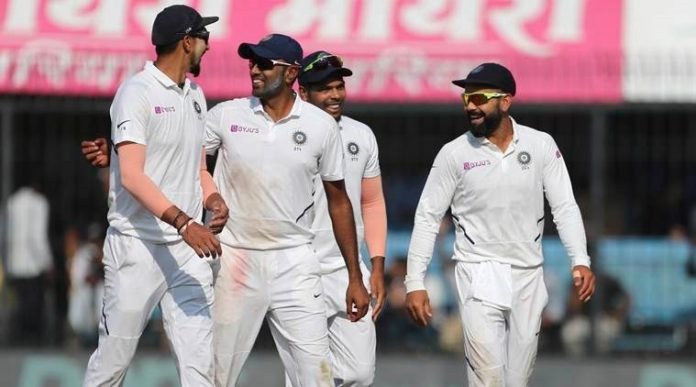 It was a stunning display of new-ball bowling from the Indian pacers. The wicket remained a good one for batting, but such was the sheer ruthlessness from the hosts’ seamers that they were all over Bangladesh once again. After India made the declaration before the start of play on the third day of the Indore Test with a lead of 343, the visitors were reduced to 60 for 4 in their second dig by Lunch, trailing by 283.

Umesh Yadav and Ishant Sharma started in such a rhythm that they posed questions almost every other delivery. It was no surprise that only pacers operated all session. Umesh bowled with great pace and swing while Ishant got the ball to move both ways. Both bowlers capitalized on the early swing that troubled the batsmen with the outside edge beaten ample times. Umesh once again was rewarded early, cleaning up Imrul Kayes. It wasn’t so much the pace or the swing as much as the length that eked out an inside edge on to the stumps. Ishant then knocked Shadman Islam over in the following over with a fuller delivery that swung back in.

There were a few reviews, three of which went against India which saw them lose both their reviews and an excellent one gave them the wicket of Mominul Haque. The on-field call was not out, but Mohammed Shami was so convinced that he egged Virat Kohli to review. This cut back in from a length and was found crashing into leg stump. Shami was at his best, like he has been in most of the second innings, to pick his second as Mohammad Mithun mistimed a pull to hand Mayank Agarwal an easy take as Bangladesh slipped further.

The only thing that went Bangladesh’s way in that session was Mushfiqur Rahim being handed another life early on in his innings after Rohit Sharma dropped a sitter at second slip. Whether or not he can make it count, is a different story.