Bangladesh rise above the crisis to seal historic win 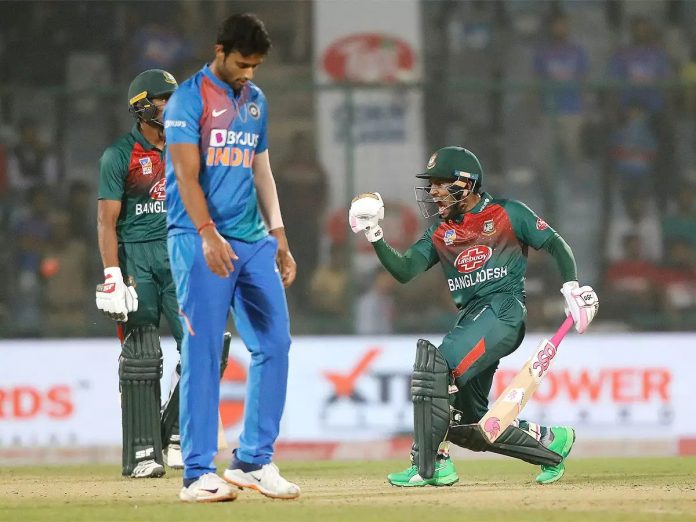 Not many saw this coming, which – admittedly on a day where more than 30 flights were diverted from Delhi – one couldn’t see much anyway, especially in the lead-up. Nevertheless, as the situation improved in the evening, a crisis-ridden Bangladesh without two of their top batsmen in Shakib Al Hasan and Tamim Iqbal. The win, being their first over India in T20 cricket, was a landmark one, but more than that it gave the visitors – reeling from off-field woes – a much-needed breath of fresh air.

The theme of India-Bangladesh T20Is, at least those in memory, was based on how Bangladesh come close, they almost have it in the bag, and then India steal it at the death.

Mushfiqur Rahim has previously been front and center in one of their heartbreaks. But there was some salvation in his roar which originated through the silence at the Kotla, after he was front and center of a memorable moment for Bangladesh. Bangladesh’s best batsman steered a chase of 149, responding to his captain’s call for more consistency from his batsmen just a day prior. And he dragged it off from a tense circumstances, just the kind that the tigers have been acknowledged to wreck.

It was a validation of his approach to take the game deep, which could’ve easily come into the spotlight had things turned ugly. Even more so considering how luck had smiled on Rahim like nobody’s business. Not only was he dropped at a crucial juncture, India even missed out on a couple of review opportunities for LBW appeals off Chahal.

All this happened during his partnership with Soumya Sarkar which provided much of the structure for the chase. However, although their stand was worth a significant 60 runs, it had also taken its time – 55 balls to be precise. With eight wickets in hand, going as far as the 17th over, a loss would’ve been hard to justify.

But the approach wasn’t unfounded. It was a pitch where every batsman struggled, going back right to the start of the Indian innings. Rohit Sharma’s first-ball boundary may have smashed any remaining concerns around visibility, but it wasn’t a sign of things to come. Shafiul Islam struck back in that very over to let India know the same – his nip-backer proving too good for the Indian captain who’s had issues with similar deliveries in the past.

There were further glimpses of how the pitch acted up at every chance, with KL Rahul – coming off some good form in the Vijay Hazare Trophy – finding it elusive here in his 17-ball stay, perishing to a ball that held up from leg-spinner Aminul Islam. Shikhar Dhawan held the innings along for as long as he could, without much dominance, but it wasn’t until the final burst from Krunal Pandya and Washington Sundar – the duo smashing 28 from 10 balls to close out the innings – that the hosts found any momentum of substance.

The chase wasn’t plain-sailing for Bangladesh, as expected. Things were tight all the way through, right from the moment Liton Das punched Deepak Chahar straight to point in the first over. His opening partner in debutant Mohammad Naim didn’t offer much in the way of confidence with his hit-and-miss approach, which didn’t last long anyway as Chahal – who was right on top of his skills – outfoxed him with a googly.

That brought Rahim and Sarkar together, both finding the going tough against the duo of Krunal and Chahal, who raced through the middle-overs while also tightening the screws. But Rahim, in particular, ensured the boundaries kept coming to release the building pressure regularly, before he completely burst the bubble with his assault on Khaleel in the decisive penultimate over, during which he also brought up the half-century.

The pressure of having the win insight, combined with India’s winning know-how, has been Bangladesh’s nemesis in the past. It wasn’t so today. Today, they rose above it.

A glance at the statistics and some hard facts would show that as far as their individual careers are concerned, Lionel Messi has eclipsed...
Read more
Sports

Aus vs Ind: Crowds to return to stadia for men’s cricket after 8 months

The three-match ODI series between India and Australia, which will get underway at the Sydney Cricket Ground on Friday, will also be the first...
Read more
Sports

Australia limited-overs cricket captain Aaron Finch on Thursday backed Will Pucovski for an early opportunity in Test cricket by saying that late entry into...
Read more