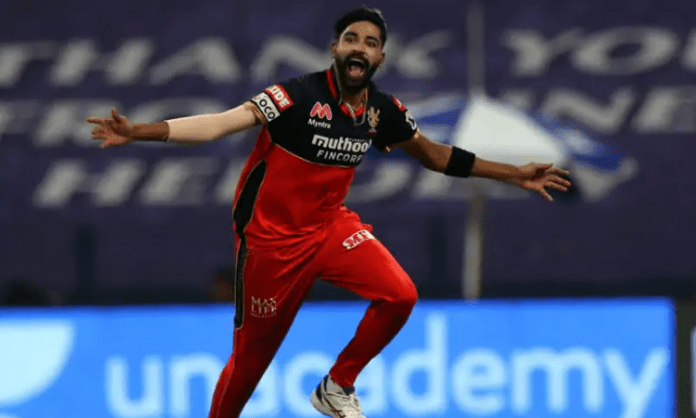 Mohammed Siraj’s international outings have been disappointing. So too have been those in the Indian Premier League. Leading up to the game against Kolkata Knight Riders on Wednesday, Siraj had leaked runs at over 10 an over in the three previous games this season.

After a decent debut year in IPL 2017 with SunRisers Hyderabad (SRH), he moved to Royal Challengers Bangalore (RCB) in 2018 but the overall performance with the Bangalore-based franchise was anything but impressive. He leaked runs and didn’t get too many wickets over the next two seasons. That problem spilled over to this year too.

On Wednesday, things, however, changed when he took the new ball for the first time in an IPL game since 2017.

The ball swung on a wicket that aided swing. Even though Siraj had been practicing with the new ball in the nets, he didn’t know he’d take the ball first up.

“When I entered the ground, Virat Bhai told me, Miyan ready ho jao (Gentleman, get ready),” Siraj said after the match. “And as I had been practicing at the nets, I had the confidence. It really felt good that the ball moved away, and I began to get natural outswing.”

Skipper Virat Kohli said it was a late call to give Siraj the new ball.

“Was thinking of giving Washy (Washington Sundar). We had the option of the plan to start with Washy and bring (Chris) Morris in the second over then we thought let’s give Siraj the new ball with Morris. Let him set the tone and then let Siraj try and swing the ball,” said Kohli describing what prompted him to give Siraj the new ball.

Siraj said that he was a bowler with natural in-swing but during practice he found that he was getting the ball to move away and he went ahead with it.

While right-handers Rahul Tripathi and Tom Banton too were victims of balls that moved away or straightened, the best sight for him and RCB was reserved for Nitish Rana.

The left-hander has a weakness against the short ball and was probably expecting that with the fieldset for it. But Siraj slipped in one he has been practicing, which would move into a left-handed batsman. Rana was bowled.

It also helped that the RCB team has two good left-handed batsmen in Parthiv Patel and Devdutt Padikkal at whom Siraj had been bowling those deliveries.

Siraj has had a chequered career all through. Before this, he had impressed only by India A and Hyderabad Ranji team. In the only ODI he played, in 2019 in Adelaide, he conceded runs at 7.6 without picking a wicket. In the three T20Is he has played, he leaked runs at over 12 and hasn’t got too many wickets.

But things may change. Ahead of this tournament, Siraj had told media that he is looking at IPL as a platform to come back into the Indian team where competition for pace bowling spot is strong.

On Wednesday too, he reiterated this. “When this IPL began, I thought I will do something magical. And I am glad I did.”