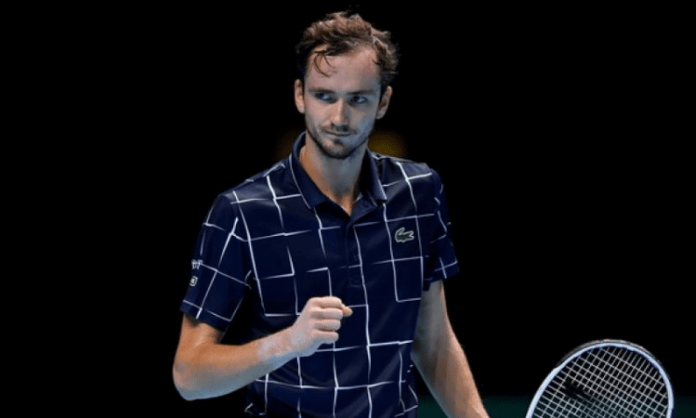 Daniil Medvedev defeated tournament debutant Diego Schwartzman 6-3, 6-3 to set up a mouth-watering semi-final clash with Rafael Nadal in the ATP Finals at the O2 Arena here.

The win over Schwartzmann enabled him to complete a 3-0 run in Group Tokyo 1970. It is a massive improvement from last year when he went winless. The Russian’s match against Nadal will take place in the early hours of Sunday (India time).

“I was playing great in the two previous matches. I think it is always good to stay undefeated for confidence. I wanted to win the match, so I am really happy that I have done it,” said Medvedev after the match. “I was serving really well today, so that helped me a lot throughout all the match.”

Nadal leads their career head-to-head series 3-0, including a stunning comeback from 5-1 down in the third set of their clash at last year’s Nitto ATP Finals.

“I like playing all of the (Big) Three. When I was so young, starting to hold the racquet and just started to be interested in tennis… I started to see Grand Slams,” Medvedev said. “First it was Roger winning everything, then Rafa came and started to make his mark and then it was Novak. It is a great pleasure to play against all of them and I am really looking forward to tomorrow.”

Medvedev became the first Russian to compete in the ATP Finals in consecutive years since 2009 title-winner Nikolay Davydenko (2005-09). He has not yet lost a set. He is the only player to go undefeated in group play.

Schwartzman, on the other hand, finished the best season of his career with a 25-15 record. The Argentine cracked the top 10 of the ATP rankings for the first time in his career and reached his first Masters 1000 final.