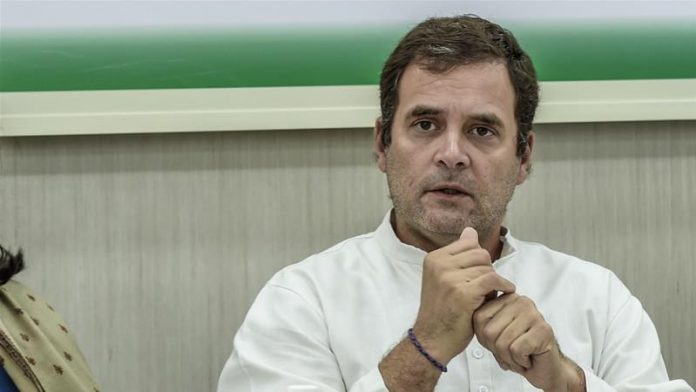 Today as we remember our 40 CRPF martyrs in the #PulwamaAttack , let us ask:

1. Who benefitted the most from the attack?

2. What is the outcome of the inquiry into the attack?

3. Who in the BJP Govt has yet been held accountable for the security lapses that allowed the attack? pic.twitter.com/KZLbdOkLK5

But in subsequent months, as Lok Sabha election drew near, he stepped campaign against the prime minister and the BJP-led NDA government’s policy to deal with terrorism. India is marking the first anniversary of the Pulwama attack, the deadliest in decades on security forces in the region, by Pakistan-based Jaish-e-Mohammed (JeM) on February 14, 2019.

At least 40 CRPF jawans were killed after the convoy of 78 buses, in which around 2,500 personnel were traveling from Jammu to Srinagar, in the attack.

Following the dastardly attack, India launched extensive diplomatic efforts to get Jaish-e-Mohammed (JeM) chief Masood Azhar designated as a global terrorist, which finally became a reality on May 1 last year when China lifted its technical hold on a proposal introduced by the US, the UK, and France in the 1267 Committee of the UN Security Council.

Around 12 days after the terror attack, in the wee hours of February 26, Indian Air Force (IAF) jets bombed the JeM camp in Balakot, in Pakistan’s Khyber Pakhtunkhwa province.

The decision to carry out airstrikes was taken within 24 hours of the Pulwama attack, with the government giving the Air Force two weeks to select terror targets and launch airstrikes against them, three people familiar with the planning of the mission said, asking not to be named. The Balakot strikes are a classified operation.

Saints and seers in Ayodhya are up in arms over the statement made by Nepal's Prime Minister K.P. Sharma Oli that the real Ayodhya...
Read more
National

The body of a four-year-old boy, who had gone missing from his house in Aliganj area, has been found hanging from a tree with...
Read more
National

The Kanpur Police have arrested another member of the Vikas Dubey gang, Shashikant alias Sonu, on Tuesday from the Mela Tiraha area in Kanpur. Addressing...
Read more

Indian men's hockey team's midfielder Sumit has said the time off from national camp has been refreshing for him, and he is now again...
Read more

A recent spike in the number of COVID-19 cases in the Australian state of Victoria has brought a planned reopening of domestic borders into...
Read more
Read More