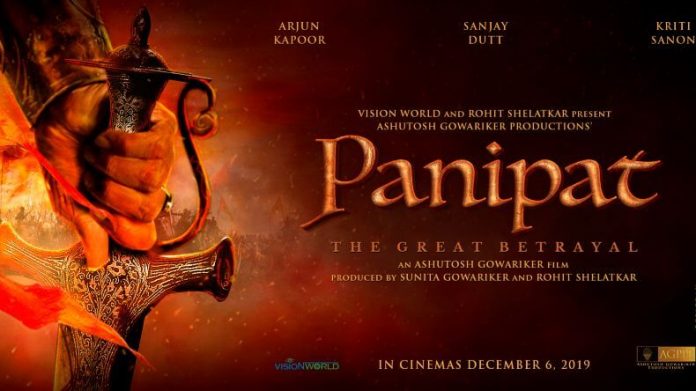 The trailer of Panipat, starring Arjun Kapoor, Sanjay Dutt, and Kriti Sanon, is out and it has a major Sanjay Leela Bhansali hangover. The trailer opens by establishing the great Maratha empire and Kapoor’s Sadashivrao Bhau is handed over the Peshwa sword, making him the leader.

His arch-enemy here is Sanjay Dutt’s Ahmad Shah Abdali who is known to be a ruthless killer. The trailer also introduces Kriti Sanon as the Maratha’s dutiful wife who can swing a sword if need be.

Since we have seen Ranveer Singh playing a Peshwa in Bajirao Mastani, we can’t help but compare Arjun Kapoor’s act to that flawless performance. His look is designed to fit the era, but the aura that Ranveer exuberated in Bajirao is nowhere to be seen here. Even Sanjay Dutt’s Abdali is a little reminiscent of Ranveer’s Khilji in Padmaavat. Not just the characters’ looks, even the props look like they were borrowed from Sanjay Leela Bhansali’s sets, especially the headgear worn by Dutt’s Abdali.

Before the makers jump in defense that we shouldn’t be comparing two works of art, they must understand that this sort of comparison is bound to happen. There are only a handful of memorable performances that we have seen in Hindi cinema in the last few years and when two of those performances become a sort of reference point of that era for the audience, comparisons will happen. If they wish to indeed impress the audience, their end product needs to be superbly elevated.

Panipat is the story of the third battle of Panipat that was fought between the Marathas and the Afghan invaders, but it is yet to be seen if the film sticks to historical facts or wanders into fiction.

Director Ashutosh Gowariker has helmed films like Lagaan, Jodha Akbar, and Swades in the past but the wounds of What’s Your Rashee and Mohejno Daro are still fresh for those who saw these films in theaters.