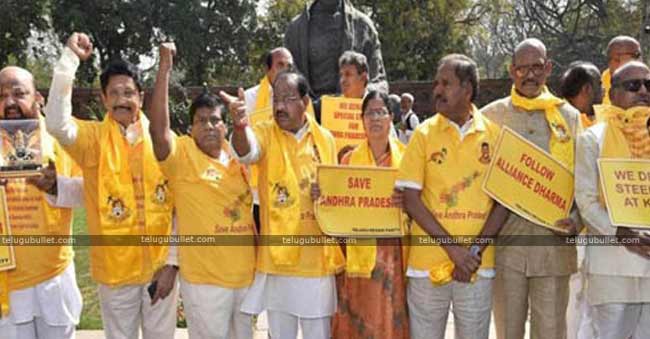 The AP CM Chandrababu Naidu intensified the verbal attack on his National rival Narendra Modi. Countering the Centre’s act of suspending his party MPs, CBN ridiculed Modi of pushing AP into the pit of undevelopment.The other day, TDP MPs were suspended by the Speaker Sumitra Mahajan for protesting with Placards of Special Category Status inside the house. The Winter Sessions turned violent with the TDP MPs and their supporting AICC leaders and it resulted in the suspension of Telugu Desam Parliamentarians. Condemning this act of Centre as ridiculous, the TDP National Head Naidu declared Modi as the cheater of AP.

He claimed that BJP, YSRCP, and TRS are conspiring against Andhra Pradesh and its development with a prime motto of defeating TDP in 2019 elections. Naidu countered Modi that NTR never declared that TDP was founded against Congress in his regime and also Congress unlike BJP never created hurdles for AP in its development. Whereas BJP, according to Naidu has not only harassed the AP State post the bifurcation but also backstabbed it in the name of Special Category Status.CBN stated that Modi is the Prime Minister of India is showcasing his partiality over the Southern States and he pointed out AP as an example. The AP CM reminded that Modi except bringing soil of North and Water of River Ganges did nothing to develop AP and its new capital Amaravathi.