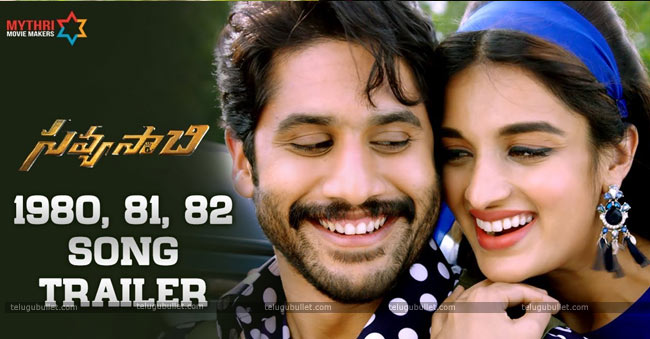 Naga Chaitanya and Nidhi Agarwal combinational movie Savyasachi is coming on November 2nd. Before that, here are video song trailers of Savyasachi, ‘1980,81, 82’ songs and ‘Why Not’ song. The ‘Why Not’ song trailer, the ‘1980, 81, 82’ song is here now. Both songs are duets, and super cool. Nidhi Aggarwal makes her debut in Telugu film industry and her upcoming movie is Akhil’s Mr.Majnu. Thus, Nidhi doing films with two Akkineni brothers.

Besides, the song 1980 is really superb. All visuals make us remember the old things like chocolates, candies, vehicles, television, and other many things. The song making completely creative and looking different. The song was made in earlier days costumes & dances and with black & white slides. Chandu Mondeti is the director of this film and it is his second film with Naga Chaitanya after Premam. However,  M.M.Keervani first time giving music to Naga Chaitanya film and Nagarjuna old song also in this film. Finally, the movie will be there on November 2nd.