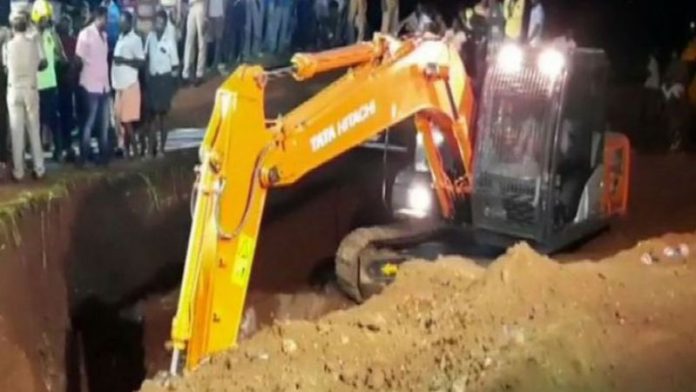 A two-year-boy is battling for his life after falling down an abandoned borewell in Tamil Nadu’s Trichy district. Police and fire rescue teams are working to rescue him. A team from the National Disaster Response Force (NDRF) has reached Nadukattupatti, where the incident occurred. Rescue efforts have now been going on for more than 18 hours.

The young boy, Sujith, had initially been trapped at a depth of around 26 feet and was responding to calls from the surface. However, he later slipped further down the borewell, according to Health Minister Dr Vijaya Baskar, who has camped at the site.

“Initially one of his hands was knotted to a rope sent through a pipe and he remained at a depth of 26 feet. Attempts to knot the other hand too and pull him up resulted in him slipping at the last moment,” he said.

Police say Sujith fell into the borewell at around 5.30 pm on Friday night while playing nearby. There are conflicting reports about the total depth of the borewell – some say it is 600 feet deep, while others say it is 1,000 feet.

Attempts to reach the boy by excavating nearby areas with the help of earthmovers were called off after the machines hit a layer of rock.

In addition to the fire and police rescue teams, Madurai-based plumber, Manikandan, whose robotic invention once helped rescue a three-year-old boy is also helping.

Although oxygen is being supplied, there is no food and water and health officials are concerned about the boy’s condition.

Despite several such tragedies in the past, police, fire, rescue and disaster management teams do not have a standard operating procedure. The crisis is often handled with a trial-and-error approach that results in time being wasted and, sometimes, in a tragic ending.

Saving water is necessary and the question in one’s mind is how to save water in daily life? There are simple ways to save...
Read more
Editorial

Expect higher Electricity bill for Consumers from April 1 in Telangana

Users are expected to pay higher electricity bills from April 1 as Chief Minister K Chandrasekhar Rao is considered to have accepted the decision...
Read more