BJP’s Tit For Tat For AP-TDP? 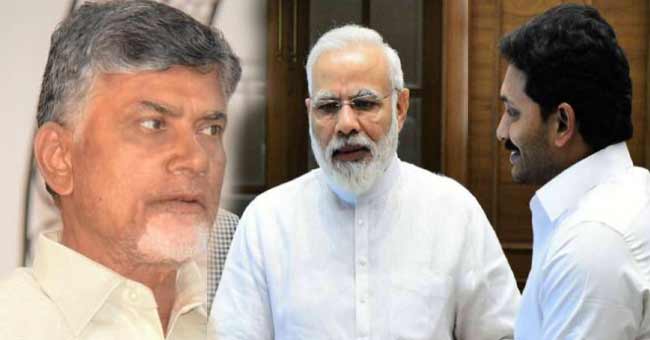 In what may be called as a Political revenge, the Central party BJP is heavily speculated to be seeking out it’s payback time on TDP. The detailed information regarding this secret speculation as follows.

Even though the BJP won the No Confidence Motion against the TDP, the heads of the Saffron party are still furious on the Yellow Fort for moving the motion. Indian Prime Minister Modi sidetracked the Special Status and lashed out on Opposition Congress and new rival TDP in the happened debate. As the people of India are almost forgetting the Parliament debate the other day, BJP is planning to attack the TDP as a sign of tit for tat.

According to the updated information from the Capital, the BJP which has just three leaders in the AP Assembly is all set to seek revenge. Amit Shah is rumored to be directing the AP BJP MLAs to pass the No Confidence Motion against the ruling party of AP, TDP in the Assembly. However, to pass it the Motion needs a minimum of 50 MLAs and for that, BJP is going to take the help of speculated secret partner YSRCP.

It is a known thing that YSRCP MLAs boycotted the house and staying far from the Assembly affairs. If at all BJP bargained with YS Jagan and offer him CM post in 2019, their hidden friendship would come forth and gets revealed to the entire state. This might work in favor of TDP and may backfire at YSRCP for their power hunger. So YSRCP might be reluctant about joining hands with BJP for now but they might form an alliance just a couple of months prior to the D-Day.

WhatsApp
Facebook
Twitter
Previous articleWhat is virtual Reality marketing?
Next articleTelangana Gets A Better Rank Than AP In Best Governance