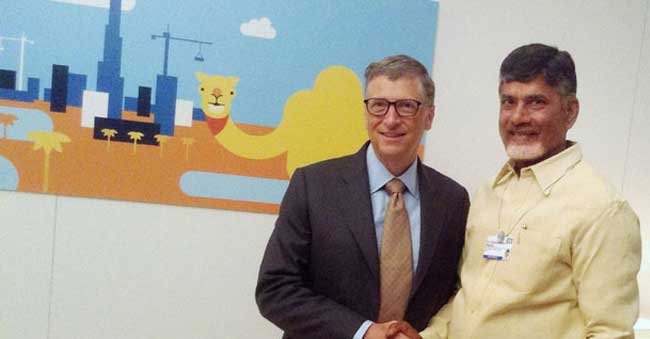 Chandrababu Naidu meets Bill Gates on the eve of the ‘Global Agri-Tech Conference’. The tech giant has been invited to take part in the ‘Global Agri-Tech Conference’. During the conference, Chandrababu Naidu and Bill Gates had an in-length conversation about the major concerns in the field of Agriculture and how the lives of farmers can be improved. Both the leaders agreed to cooperate on various fronts. Post the final conclusion of the conference, Chandrababu Naidu and Bill Gates have left to Lucknow to participate in a private meeting with Yogi Adityanath, Chief Minister, Uttar Pradesh. Following are the key highlights of the conversation between Andhra Pradesh Chief Minister, Chandrababu Naidu and Microsoft Co-Founder, Bill & Melinda Gates Foundation Founder, Bill Gates.
The discussion picked up momentum after Chandrababu expressed the concerns on the critical state of agriculture in the state and the nation.

Bill Gates questioned Chandrababu over the usage of fertilizers in Andhra Pradesh. Chandrababu states that ‘Our agriculture is greatly dependent on the usage of fertilizer. We are working on ways to reduce the dependency on fertilizers as much as possible. The state saw 15% dip in the usage of fertilizers. The Geological survey department is carrying our wide-spread soil tests so that we can assist the farmer about which crop is more suitable to the soil, climate, and environment of that place. We consider this summit as a ‘first step’ in the developing of Agriculture Industry in Andhra Pradesh and India.’
Both the eminent personalities have agreed upon to worth in tandem for the development of agriculture and farmers. This means that the Andhra Pradesh State Government will be working with the Melinda-Gates Foundation on various fronts.

Chandrababu further expressed his deep concern over many ‘ignored’ aspects of agricultural industry and the farmers. The AP CM said, ‘everyone is talking about Food Security. But the time has come to talk about the ‘security of the farmer’. We are working towards the ‘immediate disbursal’ of agricultural loans for the farmers. We are striving to create and develop policies that would help the Farmer to establish himself as an important entity in this society. The farmers have been long ignored and were limited to the villages. Things have to change, and we will change them very soon.’ 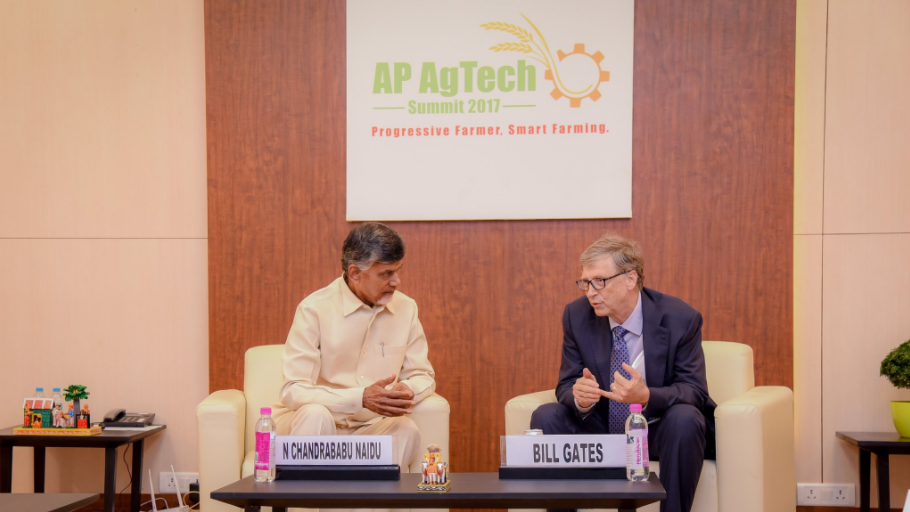 CM Chandrababu further added that ‘The latest technology should reach the farmers. They need to be well-equipped with the technology which will aid them in improving their yield, and be more efficient and productive. Our ultimate aim should be to ‘increase the revenue of each and every farmer in this state and country’.

After knowing the latest developments and reforms in the agricultural sector, Bill Gates was highly impressed. Bill Gates has shown immense interest in learning about the transformation of the agricultural industry in the state. Briefing more about the reforms, Chandrababu said:
• Agriculture is key to national food, and nutrients are key towards good health. This is the template which we are implementing in this sector.
• In Andhra Pradesh, a large number of ‘Woman Empowering’ groups work together in carrying out various agricultural methods and practices
• Various ‘Farmers Producers Organizations’ have been established in the state to aid the farmers right from sowing the seed to the production of yield.

Chandrababu takes a dig at the Congress….

‘The state’s agricultural has seen crisis during the last government rule. Various indexes that denoted the progress of Agriculture in the state have seen a tremendous dip. We are currently in the rebuilding stage and are sure that a jump in the indexes will be seen in the coming few years. After our government came to the power, the electricity has moved from Deficit to Surplus,’ said the CM.
Explaining to Bill Gates, ‘we are currently planning to introduce 2nd Generation Electron Reforms in the Electricity and Distribution department. We humbly request you to lead the specific proposals on Agriculture and Rural Innovation in the State.’ 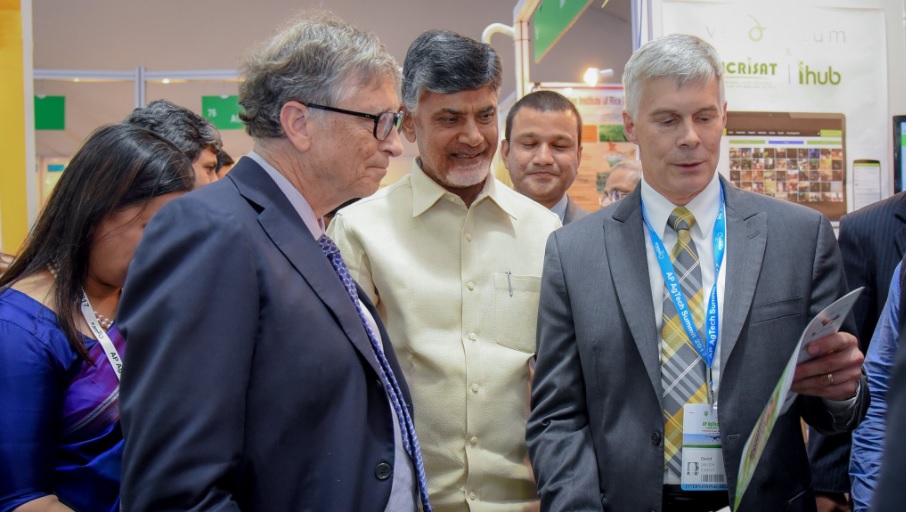 On hearing the description of various reforms and future innovative programs, Gates expressed happiness with Chandrababu. Bill Gates further said, ‘I am really curious about your proposal. I will work out my calendar and schedule to evaluate how much I need to dedicate to your proposal. The ‘Global Agri-Tech Conference’ should be held in Andhra Pradesh annually. The Andhra Pradesh State government should ensure that this conference holds the key to the development of Agricultural Industry in the state, India and the world.’

Chandrababu states that ‘We take Happiness as the index for any program that we undertake. Based on the ‘Positive Feedback (from the people) Index’, the targets are determined accordingly. We are also conducting ‘Happy Sundays’ to improve the Happiness Index and consider that ‘Happiness’ of the people is the most important thing for the government.

Later Bill Gates stated that ‘The Gates Foundation will work in tandem with the Andhra Pradesh State Government. We believe that the Gates Foundation should extend its cooperation and support to the AP Government in the fields of Agriculture, Health, Nutritional Assessment, and Sanitation. We are currently working on ‘hybrid’ Toilets. We have realized that treating of human excreta is a major concern. Hence, the ‘Hybrid’ toilets are being developed to ensure that the human wastes are broken and treated by a special mechanism within the toilet itself. In the coming five years, we hope that we will achieve a major breakthrough.’

Chandrababu Naidu to ‘Reshuffle the Cabinet’

Bill Gates: Building Toilets is like opening Saving A/C. Challenge lies in getting people to use them.

Congress leader Kapil Sibal on Friday said that the encounter killing of gangster Vikas Dubey was predicted by many persons and questioned if it...
Read more
Uncategorized

Yes Bank's Capital Raising Committee (CRC) of the Board of Directors on Friday set a floor price of Rs 12 per share for its...
Read more