Home Sports I felt it swings a lot more as compared to the red...
Sports 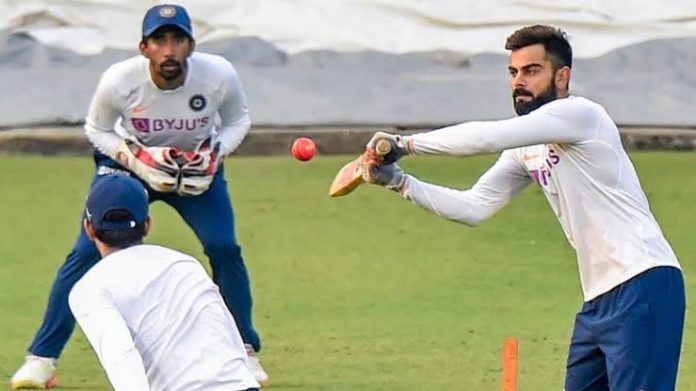 For the first time on Wednesday evening – two days ahead of the historic Day-Night Test in Kolkata – the entire Indian squad trained with the pink ball. Eden Gardens has decked up and has even brought in a couple of mascots looking like the pink ball to mark the grand occasion, but as far as the game is concerned, there’s so much of an unknown for the Indian side.

To take their training as close to match simulation as possible, India set up a make-shift white sightscreen in front of their nets to see how easy or difficult it is for batsmen to spot the pink ball with such a backdrop. Each of the Indian batsmen who took turns in the nets appeared to be spotting the ball alright, as the batting session began just before twilight zone and stretched into a phase when the floodlights were in full force. Curator Sujan Mukherjee later confirmed to a news agency that a white sightscreen will indeed be in play during the Test.

“From my experience, I can say that the ball is hard to pick during the twilight time. There is a black backdrop for the white ball so we have to see how different a white backdrop is going to be,” India’s wicketkeeper Wriddhiman Saha said, highlighting the issue that he – and Liton Das – could face over the next few days. “With the white ball, there’s still the feeling that this is a white ball even when it is old. I am not sure how different it is going to be with the pink ball,” Saha added.

Incidentally, Bangladesh’s spin bowling consultant Daniel Vettori also spoke of the uncertainty and the difficulty around how the fielders behind the stumps, who are expected to come into play a lot more, will adapt.

“Visibility [during the twilight period] is fine. I think the only anecdotal conversations I have heard is that it [the pink ball] has been a little bit hard to pick at square leg and those areas. I haven’t experienced them myself, that’s what I have heard. That will be interesting to find out if the slips are picking it, gully, the umpires. They say there is a small halo effect that the ball has,” Vettori said.

The excitement about the historic fixture had begun even before the start of the Indore Test, so much so that a few of the Indian batsmen alternated between the red and the pink ball during throwdowns. There was even an optional nets session after the early conclusion of the first Test there, which many of the regulars skipped. The reality, though, is that the Indian team has trained for a very brief period with the pink ball to be able to accurately predict its possible behavior in the second Test.

From what he’d faced in those throwdowns, Virat Kohli reckoned it could swing for a longer period, but was unaware of how the old ball would behave. It is also unclear what could happen to the color of the ball once the shine is off.

“I observed that it swings a much more as correlated to the red ball because there’s more cover on the ball which doesn’t go beyond too fast. And the seam operates correct quite a margin. I think if the pitch has extra help for the bowlers then the bowlers will be in the game, especially fast bowlers throughout the Test match. I don’t know how the old ball performs because, amidst the dew and the extra cover dying off, it will be intriguing to see how much the old ball does,” Kohli had said.

Saha echoed Kohli’s thoughts and felt reverse swing could be out of the window. While that’s not great news for Shami, one of the finest exponents of reverse swing bowling in the game currently – as demonstrated in Indore – he’d be raring to have a new-ball burst should Kohli’s opinions on-seam position be true. He is, after all, the pacer who presents the best seam position in world cricket according to India’s bowling coach Bharat Arun.

Considering the form that Shami showed in the recent series against South Africa, and coolly carried it over to the first Test against Bangladesh, Saha feels the change of ball won’t affect his impact.

“The ball is not the factor for Shami and even the others. He has been consistent, and deadly with his reverse swing. We still need to see what happens in the match but given his form, the ball doesn’t matter.”

The general feeling among the players, at least until the session on Wednesday, has been a mix of excitement and wariness. That combined with the fact that the conditions and the ball will be as alien to Bangladesh as they are to India has only piqued the curiosity regarding what could transpire at the Eden Gardens from Friday.

Committed to bring my A-game to find regular spot in team, says Nisha

Indian women's hockey team defender Nisha has stated that seniors have made it easier for youngsters like her to be at ease during the...
Read more
Sports

Football legend Lionel Messi scored a historic goal during his side's 5-1 win over Ferencvaros at the Camp Nou in the ongoing Champions League. After...
Read more

Reshma Khan, the Programme Head at the All India Radio-Akashvani, represents the voice of progressive women in India who are fearless and intelligent, witty...
Read more

Worldwide IT spending is projected to reach $3.8 trillion in 2021, an increase of four per cent from this year, according to a forecast...
Read more
Read More