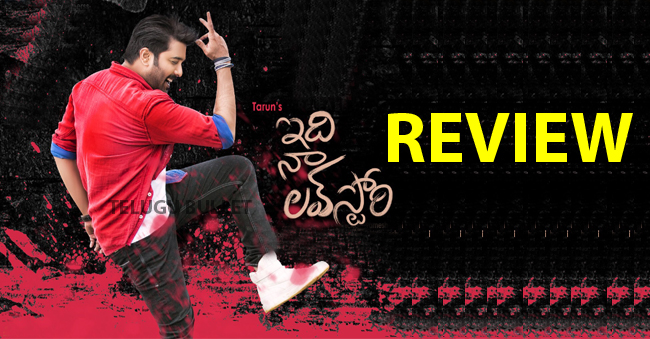 Tarun had blockbuster hits during his time in the Tollywood film industry. His films were a synonym for young and refreshing love stories. From being a chocolate boy, the hero managed to become a leading actor in a short time. Just like everyone has a fall, Tarun too had a fall, but a drastic fall. After taking a long break, Tarun is back with ‘Idi Na Love Story’

Rachana, who works as an RJ (Radio Jockey) sends her brother Abhi (Tarun) to Araku, to meet her fiancée’s sister. She hopes both of them to get into love. He gets to meet another girl Dr Shruti (Oviya) when no one is at home. Both of them share a lot about their past love stories and eventually falls in love. The story takes a different turn when Abhi comes to know that, Shruti is not the one whom his sister asked him to meet. To make it up, Shruti comes with different stories trying to reason out. Did Abhi confess his love? What about the girl Rachana asked Abhi to meet? And how did Abhi sort out everything?

The films start off with Tarun narrating a story. Though there has been much hype around the film, be it because of Tarun’s comeback, or the title itself, the movie did live up to its expectations. The theme is quite old; a love story. But the new elements give us the fresh feeling.

The screenplay has been above par, and direction is quite good. Though the dialogues seem horrendously funny and lame at times, few of them are sure to have a long impact. Director could have made use of other characters in the film too. It makes sense that the whole film revolves around the lead pair, at the same time, no one wants to see the same faces in every frame.

Despite the film being an official remake of a Kannada film, the director made some key changes to suit the script to Telugu audience. The writing could have been much better. There is a lot of scope for improvisation in terms of the script. Cinematographer Christopher Joseph was successful in capturing the emotions and feeling through his lens. While, composer Srinath Vijay gave some soothing, romantic and fresh music.

In spite of a long break, Tharun still has the charm to woo the young audience of this generation. That chocolate boy has transformed into a better actor, who is capable of coming up with subtle emotions. Oviya Helen as Dr Shruti excelled in her role. Though it is her debut movie in Telugu, we really don’t feel that way. The chemistry between the lead pair worked quite well on the silver screen. Rest of the characters are needless.

Allu Arjun – Sukumar’s Pushpa is one of those big-ticket films that got disturbed and delayed much due to the coronavirus. While the first...
Read more
Cinema Latest

Lockdown due to pandemic is making actors try their hands at something they haven’t done till now. Also, with OTTs and digital platforms receiving...
Read more