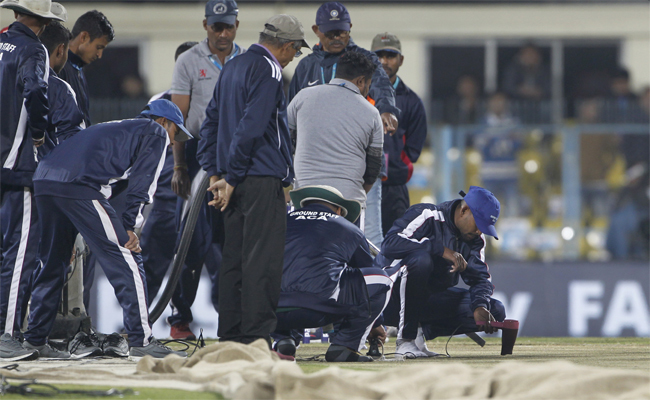 In the end, it wasn’t meant to be. The Assam Cricket Association had braved curfews, internet shut down and uncertainty in the lead up to the first T20I between India and Sri Lanka but eventually, an error ensured the game was called off without a ball being bowled. The groundstaff did exceptionally well to dry the ground but made a mistake while taking off the main cover once the rain stopped.

The water that had puddled up on the main cover slipped off from one of the corners and left one end of the pitch with pretty significant wet patches. The rain arrived at 6:46 PM local time and picked up within minutes to turn into a heavy downpour. A little over an hour was lost but the covers did come off in between before being brought back on. The first inspection was scheduled at 8:15 pm but it was soon rescheduled to 9 pm when the umpires noticed the wet patches on the track.

The inexperience of hosting games, in hindsight, had a say in the eventual abandonment. Take this for instance: when the covers over the bowler’s run-up were being removed, the ground staff hadn’t even started to clear the water over it. And hence small amounts of water did cascade out onto the field. The super soppers were able to repair that damage but the patches on the pitch were beyond repair.

Leading up to the 9 pm inspection, the ground staff – under the watchful eyes of fourth umpire Virendra Sharma and BCCI’s chief curator Ashish Bhowmick – used various methods to dry the patches. Once the covers were taken off, a vacuum cleaner was used first, followed by a few iron boxes and hair dryers. The ground staff then laid out a cloth over the pitch and used a light roller to solidify the area.

The 9 pm inspection was moved to 9:30 pm, but the umpires walked off dissatisfied after the final recce. The game was called off at 9:55 pm, ten minutes after the cut-off time from where a five-overs-per-side game would have been possible. The affected area was too soft and was around the wide-line mark for a left-handed batsman. It was dangerous for the bowlers as well, as they would not have gotten a strong foothold in their follow-through.

The decision to have a game was eventually on the umpires but they leaned on the side of caution and rightly so, according to the ICC Playing Conditions.

It was a shame really for the fans. Long queues were already in place from 3:30 pm onwards, even when the gates were supposed to open only an hour later. Even during the break, the DJ did an exceptional job of keeping the fans occupied. It all started with the fans cheering the super soppers working while it continued to pour. Once it had stopped raining, 90s Bollywood hits took over.

Virat Kohli’s three visits to inspect the pitch also brought out loud cheers, only for it to be intensified on the final occasion when he was accompanied by Shikhar Dhawan and Rishabh Pant. Harbhajan Singh, who was at the venue with the host broadcaster, too kept the fans enthralled with his dance moves as the repair work continued on the track.

In the end, the fireworks went off around 9:50 pm as the crowd started to leave the stadium. It wasn’t the fireworks they had come to watch, especially after Kohli had promised a high-scoring contest.

WhatsApp
Facebook
Twitter
Previous articleAUS Vs NZ: Australia extend lead in to the Post Lunch Session
Next articleVitamin A supplementation programme to resume after 2 year gap in Telangana