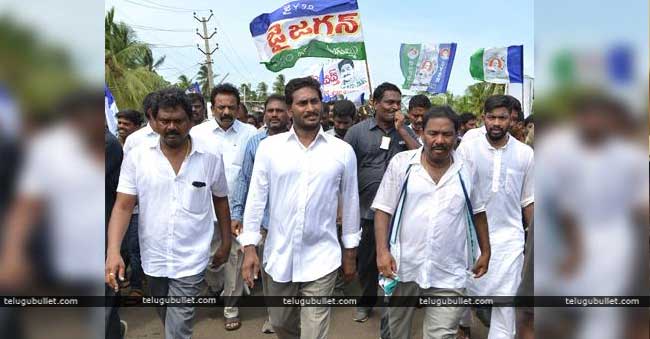 The YSRCP Chief Jagan Mohan Reddy has been touring the entire State of Andhra in the name of Praja Sankalpa Yatra. On foot, he has been covering an amazing number of constituencies. Such a leader who is all set to end this walk marathon has increased his target.Sources close to the Jagan’s camp declared that with the Public meeting in Yalamanchili, Jagan has completed stunning 2,800 kilometers in his Padha Yatra.

This is double to that of his father YSR’s infamous Padha Yatra in 2004 which made him the CM of AP. Even before the commencement of this Yatra, Jagan set himself a target of 3,000 kilometers to end it in the district of Vijayanagaram. His touring is getting an amazing response except for the places where he took a U-turn on the BC Reservations. To bring the lost glory, Jagan decided to extend his Yatra to 3,500 kilometers. This new target will push the YSRCP head to continue his tour until the tip of Srikakulam district.

Until now, he was received excellent by the YSRCP supporters in each town. But the leaders of YSRCP should sweat hard to bring huge crowds in the Uttarandhra as all the people in that region are in support of Janasena. We have to wait and see if this tremendous hard work of Jagan pays off during the time of elections or not.