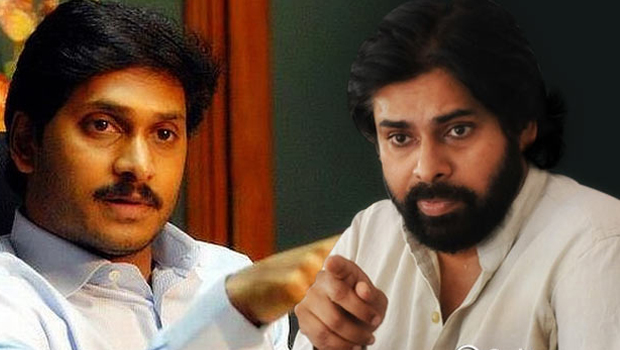 The other day, Janasena Chief Pawan Kalyan made a historical moment and made his followers happy by filing his first ever nomination as MLA from Gajuwaka constituency. Post the nomination, the Supreme of JSP slammed the Position and Opposition leaders for their acts against the welfare of the State.

After many days, Janasena Chief Pawan Kalyan uttered the name Jagan and slammed the Opposition leader to the core. Reminding of the sensational Kodi Kathi issue and the ruckus created by Jagan, Pawan questioned him for the latter’s silence and low-key response on his own uncle Vivekananda Reddy’s murder. He went further and expressed his doubt on the YSRCP leaders for claiming the murder of Viveka as suicide in the first place.

Janasenani declared that this kind of leaders who are related to crime shall be dangerous to be placed in power as they might make the State filled with violence. On the same note, Pawan pointed out at the ruling party TDP for secretly sharing their corruption with the Opposition and acting as partners in crime by mutually protecting each other.

Finally, Pawan Kalyan declared that his entry to the Assembly will change these outdated Politics to set a new trend in the AP Politics and lead the state towards development. Today, this dynamic leader will file his nomination in Bhimavaram constituency with a huge rally.

WhatsApp
Facebook
Twitter
Previous articleWho can replace Tarak in Bigg Boss?
Next articleNithin refutes rumours and made announcements on Holi

Having plunged into new depths of uncertainty in the wake of the COVID-19 pandemic, the Cricket Association for the Blind in India (CABI) is...
Read more

After Nepal Prime Minister K.P. Sharma Oli's statement on 'real' Ayodhya being in Nepal, drew flak from Hindu saints and related outfits, it is...
Read more