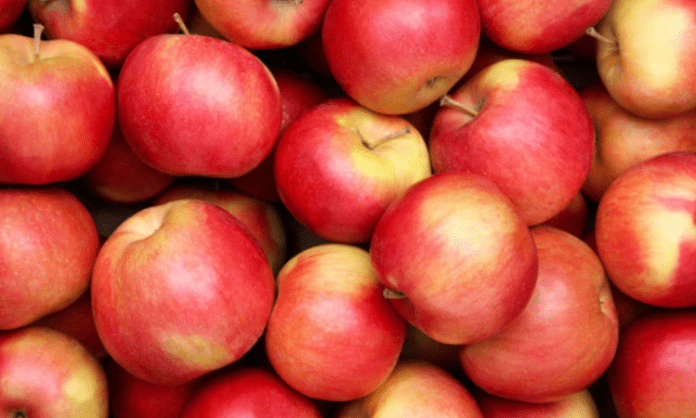 Less than the optimum yield coupled with labor pangs amid the coronavirus pandemic and fungal attack — for the second consecutive year — in Himachal Pradesh this season turn out to be a blessing in disguise for apple cultivators who say the fruit’s prices have remained at a sweet high in northern India.

“Apple prices are significantly high owing to its short supply. The prices remained almost 25 to 30 percent higher than last year’s, depending upon the quality,” Vinod Kumar, a prominent apple grower from Dadesh village in Kotgarh tehsil in upper Shimla, told IANS.

He said for the first time most of the growers are marketing the apples by packaging them in small boxes of 10 kg. Earlier, a box normally contains 22 kg of fruit.

Trade insiders say this time the apples are largely undersized owing to weather fluctuations and bear jet back spots owing to the scab disease.

The hill state is one of India’s major apple-producing regions, with more than 90 percent of the produce going to the domestic market. Apples alone constitute 89 percent of the state’s fruit economy of Rs 4,000 crore.

As per estimates of the state Horticulture Department, the state is likely to produce 30 million boxes of apples this season — approximately five-six lakh tonnes — and this is 25-30 percent less than last year’s record harvest.

A total of 8,70,310 apple boxes have been sent to different markets of the country till August 8.

Experts at the Dr. Y.S. Parmar University of Horticulture and Forestry in Nauni say incidents of scab disease have been reported from some areas of Kullu, Mandi and Shimla districts.

Trader Naresh Chauhan at the apple market in Dhalli near here said a 20 kg box of top quality Royal Delicious fetches between Rs 2,200 and Rs 2,300 in Delhi’s Azadpur market, against Rs 1,500 per box last year.

This season, he said, only a few farmers opted to sell the apples in the state. A large consignment went to the wholesale market in Delhi where they got handsome prices.

“Earlier, a number of traders from Gujarat and Maharashtra used to purchase apples directly from the farmers from their orchards. This time they are missing owing to coronavirus and the farmers are taking their crop mostly to Delhi,” he said.

Officials of the Horticulture Department said the harvesting of the crop from mid-hills of Shimla, Kullu and Mandi districts is at its peak. After that, the harvesting will be on in the high-altitude areas where the impact of the scab is higher.

Apple expert S.P. Bhardwaj, a former Joint Director at the Y.S. Parmar University of Horticulture and Forestry, told IANS the apple crop largely remained undersized owing to the deficit and erratic monsoon rains. This will result in an overall decline in the total yield.

“Shimla’s nearby apple growing areas of Kufri and Fagu saw 27 percent less than normal rainfall from June 15 onwards. During this period the crop requires rains and high moisture. In large areas in Shimla, the deficiency of rainfall goes up to 35-40 percent,” he said.

In some areas the scab disease, caused by the fungus Venturia inaequalis, makes the fruit impaired, tasteless, and undersize. Also, it damages the fruit with jet back spots.

According to Bhardwaj, poor crop management is mainly responsible for the spread of the disease.

The apple harvesting season in the state is from July to October, depending upon the plant variety.

Over the years, the apple production in the state has been erratic, say experts.

The reason is a prolonged winter spell and lack of adequate rainfall when the apple crop was ripening between May and June.

Online grocery to become $18bn industry in India by 2024: Report

As companies from Reliance to Amazon put their top dollar in serving daily grocery at your doorstep, a new report said on Friday that...
Read more
Business

Despite a stay by Delhi High Court on Bank of Baroda as the lead bank, Indian Bank has classified its loan exposure to Reliance...
Read more
Business

Around 80 percent of Indian small business owners are optimistic that their business will survive the Covid-19 pandemic and 71 percent say that they...
Read more

Japan is determined to host the postponed Tokyo Olympics and Paralympic Games in 2021 to prove that humanity has defeated the Covid-19 pandemic, Japanese...
Read more

To further secure its internal tools from potential misuse after the massive crypto hack in July, Twitter has rolled out phishing-resistant security keys, requiring...
Read more

Apple is expected to launch four new iPhones next month and a new report has claimed that one model with a 5.4-inch display may...
Read more

In another bid to build a more equitable and respectful workplace, Google has announced new measures that include new care programs for employees who...
Read more
Read More