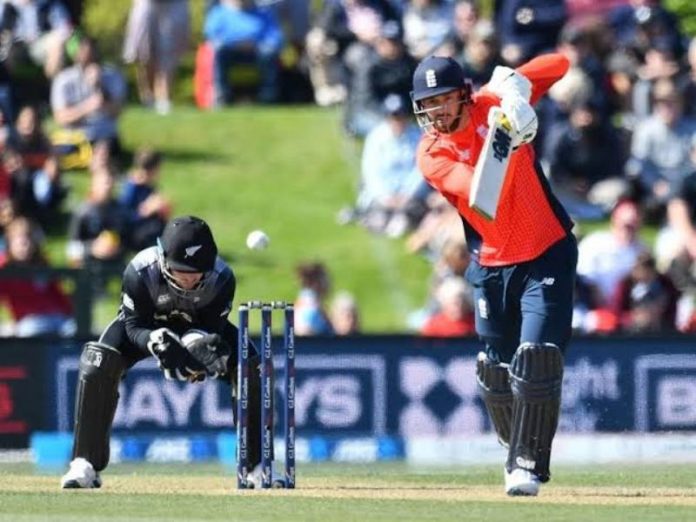 England put in a clinical performance with both bat and ball on Friday (November 1) to go 1-0 up in the five-match T20I series against New Zealand. Going into this contest with a new-look side against New Zealand sans Kane Williamson and Trent Boult, England were in control right from the word go. After restricting New Zealand to 153/5, the visitors eased to a victory with seven wickets in hand.

Scott Kuggeleijn’s 18-run over got the chase going after two quiet overs to begin with. Jonny Bairstow, who lost his Test spot recently, looked in good touch, slamming the pacer for three fours and a six. It was Mitchell Santner who struck for New Zealand in the final over before the powerplay. Dawid Malan came down the track but managed only an outside edge that was taken with ease by Ish Sodhi at short third man.

James Vince then got off to a flyer fetching two boundaries off his first four balls but Santner slowed down proceedings with another wicket. This time, it was Bairstow who fetched a wide delivery to smash it to deep midwicket where Guptill took a nice running low catch. At the halfway mark, New Zealand were still in with a shout as England needed 84 runs off the last ten overs. However, Vince switched gears to put the game beyond New Zealand’s reach.

He first hammered back-to-back boundaries off Ish Sodhi before picking a Kuggeleijn slower ball to perfection to launch one over midwicket. 24 runs in two overs shifted the momentum firmly in England’s favor and from thereon, it was easy pickings. Vince eventually got to his maiden T20I fifty and even though Santner came back for his final over to get rid of the well-set batsman, skipper Eoin Morgan got the job done with a flurry of boundaries towards the end.

Earlier in the day, the England pace attack kept things tight to keep New Zealand to just 153 on what looked like an ideal wicket to bat on. Taking the pace off the ball did work for England especially at the start with the new ball and that ploy even fetched a maiden in the second over against Colin Munro. New Zealand scored just 6 runs off the first 16 balls and the pressure did result in Martin Guptill getting an inside edge on to his stumps to gift Sam Curran his first wicket in the format.

Morgan’s decision to bowl the left-arm seamer for the third time in the powerplay backfired as New Zealand finally found some momentum. Tim Seifert first flat-batted one over midwicket and Munro finished the over with successive sixes to take 21 from that over that finally pushed the run rate beyond six. But before Munro could tee off, Chris Jordan came into the attack and finished the powerplay with the left-hander’s wicket — a low full toss chipped straight to the midwicket fielder.

The dismissal earned Colin de Grandhomme a promotion and the allrounder did keep himself busy at the crease. After nailing a one-handed six against Patrick Brown, one of the three debutants, de Grandhomme could only mistime a delivery off Adil Rashid at the halfway mark. Seifert was the next to go as England kept chipping away to deny the hosts any momentum. This time, Jordan bowled another full toss with the batsman finding the fielder but replays did suggest that the call was touch and go. With the ball appearing to dip on the batsman – the impact being made a little earlier – the umpires deemed it was not over waist-high to be called a no-ball.

New Zealand had to heavily rely on Ross Taylor and Daryl Mitchell for the finishing touches and even though the pair did click with a half-century stand, the addition of just 48 runs in the final five overs didn’t help their cause. Mitchell fetched a six each off Brown and Jordan whereas Taylor cracked a four and a six at the other end. Brown came back strong to finish proceedings with a top over which summed up New Zealand’s struggles with the willow.