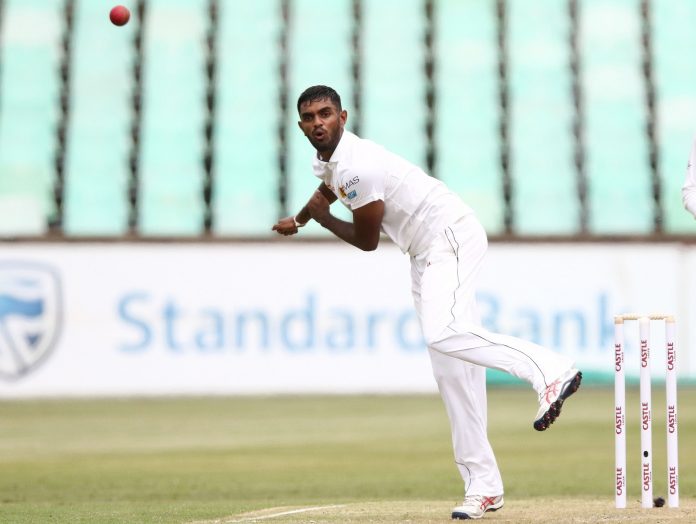 Lasith Embuldeniya picked up a couple of scalps in the second session, including the prized scalp of Babar Azam as Pakistan slipped to 171 for 5 at Tea on Day 1 of the second Test in Karachi.
The hosts began the session at 72 for 3, with Azam looking in fine touch. The mainstay of the Pakistan batting unit showed his class with a fine drive off Lahiru Kumara and followed it up with a steer off the same bowler. To his credit, Kumara also troubled Azam and Asad Shafiq (49*) with nip-backers. Azam also took a toll off Embuldeniya’s bowling, including a lofted shot over long-on and reached his fifty with a cut off Dilruwan Perera.

Eventually, Embuldeniya had the last laugh, dismissing Azam in the 40th over. Azam skipped down the track early, with the left-arm spinner dragging the length back and extracting turn to beat the batsman and for Niroshan Dickwella to whip the bails off. Despite losing the key wicket, Pakistan’s batsmen continued to attack the left-arm spinner. Shafiq employed the sweep shot while Haris Sohail skipped down the track to lift Embuldeniya over long-on. Just that at the fag end of the session, the spinner found the turn to trap Haris in front. The southpaw took the review but to no avail.

Earlier, Sri Lanka’s pace pair of Vishwa Fernando and Lahiru Kumara took advantage of the movement on offer and picked up three wickets to leave Pakistan in a spot of bother. On a track offering some assistance, Pakistan opted to bat. However, Fernando found swing and also extracted seam movement to pick up the scalps of Shan Masood and Azhar Ali in a single over. Masood’s tendency to play inside the line resulted in his dismissal, with the left-arm pacer shaping one away from the southpaw to rattle the stumps.

Azhar was cleaned up in the same over, closing the bat face early to a delivery that swung back. Abid Ali and Azam then went about resurrecting the innings. Abid took advantage of Dimuth Karunaratne’s part-time medium-pace with a four and a six. Azam, on the other hand, survived an LBW decision that went against him by taking the review. He was given out LBW off Fernando, but he placed his belief in the review and replays suggested that Azam had eked out a faint edge, and the decision was reversed. On the brink of the lunch break, Lahiru Kumara prised out Abid Ali to leave Pakistan in further trouble.

Mercedes racer Lewis Hamilton continued his hot run in the ongoing Formula One season as he romped home to a thrilling win at the...
Read more
Health

Seasoned Indian golfer SSP Chawrasia will go for another round of COVID-19 testing on Tuesday to rest assured after he was tested positive for...
Read more
Sports

Had turned down county contract to take part in Kargil war, claims Akhtar

Former Pakistan pacer Shoaib Akhtar has claimed that he had turned down a 175,000-pound county contract with Nottinghamshire to fight the 1999 war against...
Read more