Passing Bills on farm ordinances may cause Punjab unrest: CM 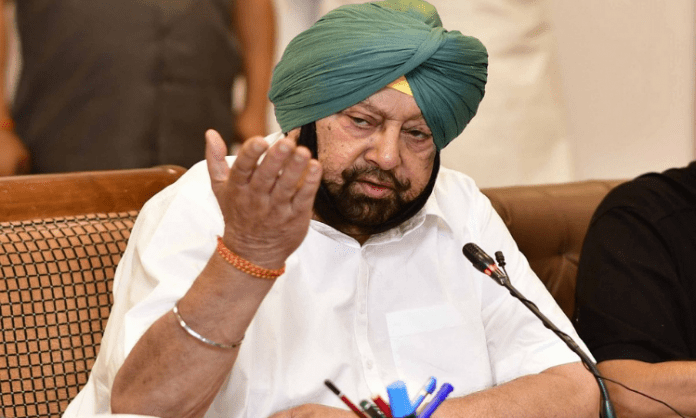 Warning that enacting laws on the ordinances issued by the Centre vis-a-vis farmers would lead to unrest in Punjab, Chief Minister Amarinder Singh on Wednesday led a Congress delegation to Governor VP Singh Badnore, seeking his intervention for non-pursuance of the three agriculture-related Bills in Parliament.

Flanked by state Congress chief Sunil Jakhar and other delegation members, the Chief Minister submitted a memorandum to the Governor and told him that the Congress felt that any move to “tinker with the present procurement system, and that too in the times of a nationwide crisis, may deepen social unrest among Punjab farmers”.

“It may not be conducive for the peace and development of the region, which faces serious challenges to public order due to a live international border,” he stressed.

The ordinances seek to provide barrier-free trade of farmers’ produce outside notified ‘mandis’, and empower farmers to enter into sale agreements with private persons for farm produce.

The Chief Minister later told the media outside the Governor’s House here that these proposed “anti-farmer legislation” would lead to a rise in public anger. “Why are we playing into the hands of Pakistan?” he asked.

“These Bills, one of which was passed in the Lok Sabha on Tuesday, are against national interests, and particularly detrimental to Punjab, where a majority of farmers till less than five acres of land and will be the worst-hit, he argued.

Hoping that the Centre will back out of pursuing the remaining two Bills and not get them passed in Parliament, he said the Centre had “failed” to take the interest of the farmers into account while issuing ordinances in this regard and instead took a stand that favored corporate houses.

The Chief Minister lamented that he had written to the Prime Minister thrice on the issue but did not receive any response.

“If the MSP regime ends, which is what the Centre seems to be moving towards, the agricultural sector will be ruined in Punjab and across the country,” he added.

Flaying the Shiromani Akali Dal leaders, including its MP Sukhbir Badal, over what he called “their theatrics and U-turns” on the issue, the Chief Minister pointed out that all except the SAD and the BJP were on board at an all-party meeting he had convened on the farmers’ issue.

“We passed a resolution in the Assembly, we talked to all political parties and farmer unions, and all were on board except the Akalis, who are now pretending to be opposed to these ordinances,” he said.

“Isn’t (Akali leader) Harsimrat Kaur Badal a member of the Union Cabinet? Why didn’t she protest there? Why didn’t she speak outside either on the issue? What did the Akali Dal do in the Assembly?” Amarinder Singh asked, terming the SAD U-turn on the ordinances a “total farce and nothing more than a face-saver”.

Amarinder Singh also accused the Union Minister of Consumer Affairs, Food and Public Distribution of making a “misleading and incorrect” statement in Parliament that Punjab was on board the move.

The Chief Minister said that Punjab was in fact excluded from the high-powered committee on agricultural reforms constituted by the Centre and included only after his government in Punjab protested.

“One meeting was attended by state Finance Minister Manpreet Badal while at the second meeting of officers, the states were clearly told that their opinion was not being sought but they were only being apprised of the proposed reforms. No mention was ever made of the ordinances,” the Punjab Chief Minister added.

Termed the passage of one of the Bills in the Lok Sabha a “black day in the history of Parliament”, Jakhar warned that under pressure for the farmer unions, the Akalis may even go to the extent of enacting a drama of resignation from the central government but it would be another farce on part of the opposition party in Punjab.