Ram Gopal Varma recently gave 1 lakh for Rohith who given the details of Chandra Babu Naidu dupe. We all know that Ram Gopal Varma is planning to make a movie based on NTR life. Especially, about the life with Lakshmi Parvathi, so he is searching for the actors. He is saying that three actors are already fixed but he is wanting more…

So, this time he announced 10 lakh reward. Means, he announced 1 lakh for Chandra Babu Naidu dupe, but, now he is waiting for NTR dupe. For that, he will give 10 lakh to the person who brings NTR dupe to Ram Gopal Varma. Really, it is a weird thing and he can use anything for the movie. Albeit, he posted his offer on Twitter and he is waiting…

3 actors short listed for NTR but i want very best..Open offer is to get NTR look alike at age he met Lakshmi ..anyone who can send video to [email protected] who can look and speak like NTR will get 10 lakhs like Rohit of Tv 9 is getting 1 lak for tracking CBN #NTRTRUESTORY pic.twitter.com/N9TNbGH4Af

However, he posted a picture of himself and Chandra Babu dupe. That is very very funny. In that picture, the duped person is wanting release from Ram Gopal Varma. The complete dialogues, you can see in the picture. Moreover, he may give offers to other characters also and put more money for them. As well as, already some suggestions are started on social media. Some people are sending the images and videos for NTR role.

Did NTR Really Introduced Lakshmi Parvati In That Function? 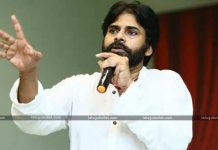 Pawan Kalyan, Aware Of Corrupt Leaders In His Own Party?