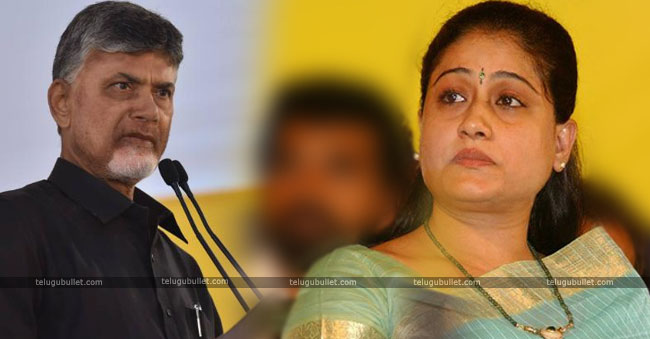 The Telangana Congress MP Vijayashanthi extended her full support to the AP CM Chandrababu Naidu’s Deeksha at the New Delhi. On this note, she fired missiles on her regional rival KCR for keeping mum.

This ex top actress of Telugu said that the Telangana CM is good at playing games with the sentiments of AP people. She reminded KCR’s promise to the AP People for staying like brothers post the bifurcation and recollected the TRS MPs asking the Centre for the Special Status. Now this TPCC MP directly questions KCR for staying silent on the CBN’s protest for the Special Status at the Delhi. Vijayasanthi decoded KCR’s mum behaviour is to impress his secret boss Narendra Modi and other big BJP leaders to get benefits and gifts. Going by this Political developments, this actress turned Politician claimed that KCR will support BJP in the Lok Sabha elections at any cost and he is reflecting the same in actions.

CBN’s Deeksha made buzz and almost all the haters of BJP expressed their concern to AP and supported CBN. his current ally Congress’s Chief Rahul Gandhi went in person and displayed his support to the TDP National Head.

Prime Minister Narendra Modi on Friday dedicated to the nation a 750-MW solar project – said to be Asia's biggest -- at Rewa in...
Read more
Politics

In a huge blow to foreign students in the United States, the US Immigration and Customs Enforcement said on Monday that international students whose...
Read more

Looking to make a difference once hockey returns, says Sharmila

After a fruitful debut year with the Indian women's hockey team where she helped her team qualify for the Tokyo Olympics, forward Sharmila Devi...
Read more

Google has launched a new organization focused on extending the philosophy and definition of open source to project trademarks. Called the 'Open Usage Commons', the...
Read more
Read More