Sona Mohapatra’s tips on right way to ‘smash the patriarchy’ 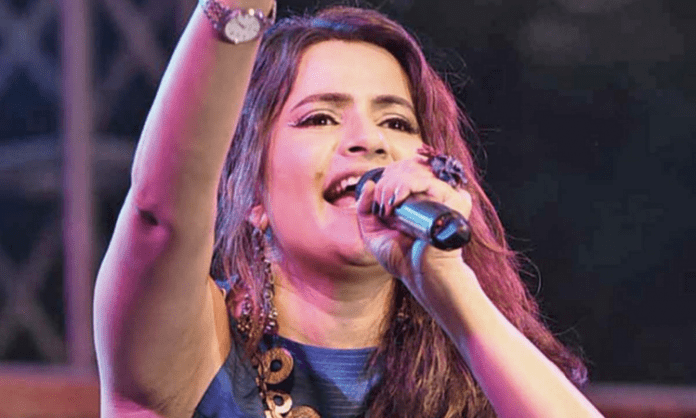 Singer Sona Mohapatra has joined the list of showbiz celebrities who have shown solidarity with Rhea Chakraborty, posting their views on patriarchy. A slogan on patriarchy printed on the T-shirt that Rhea wore at the time of her arrest had become viral soon after.

“Roses are red. Violets are blue. Let smash the patriarchy me and you,” the slogan of Rhea’s T-shirt read.

Mohapatra has now shared her tips about the right way to smash the patriarchy, beginning with pay parity among actors, speaking up, and trusting women directors.

Sona took to Twitter, where she shared around ten tips on Friday morning.

“Let’s do this the right way dear #Bollywood and #India cus the rest is mostly hot air. 1) Pay your top actresses the same as your top actors 2) Write enough worthy roles 3) Film them ‘solo songs’ to make them larger than life? (No, item numbers don’t count). #SmashThePatriarchy”

“Speak up (at least once?) about ur superstar of ages; a poster boy of toxic masculinity, a bully, serial abuser of women’s rights. Instead directors, producers, writers scramble to create more virtue signaling films for him? Actresses bend backward to in them. #SmashThePatriarchy.”

She then said to be more “inclusive in ur choices of film technicians”.

“Don’t assume a female DOP cannot shoot a big-budget film cus she’s not ‘strong’ enough?! Some of the best films in the west are shot by women! My fav; Ellen Kuras. Eternal sunshine of the spotless mind. #SmashThePatriarchy,” she shared.

“Worry and do something about the horrendous statistics of only 8/9 songs out of the 100 released by you having a female singer in #Bollywood. The solo female songs always reprise versions, never to be promoted. The duets having us in chorus only? #SmashThePatriarchy #India.”

Sona spoke about sexism and misogyny in the industry.

“7) Be ashamed of the systemic-institutional sexism, misogyny, and lopsided power structure in the industry where NOT ONE lead actress or actor spoke up about the inconvenient truths in the #MeToo movement. Almost everyone looked the other way. #SmashThePatriarchy #Bollywood & #India”

The singer spoke up for female directors in Bollywood.

“8) Trust women directors (not just the ones from the film families) with bigger production budgets. They are less likely to blow it up on wasteful ego-driven choices2. Financing a woman driven project is difficult as hell. Kudos to producer @AnushkaSharma for backing women directors”

Sona talked about how older actors are starring alongside really young actresses in a romantic angle.

“9) Also stop casting 50 plus Male ‘heroes’ in romantic angles with women half their age… the list is endless really #Bollywood. #SmashThePatriarchy #India,” she said.

She asked why should actresses “retire” in their mid-30s

“10) Cast older actresses for older women’s roles at least? Also, why should lead actresses to be pushed to retirement and oblivion in their mid 30’s while men carry on endlessly.”