69-year-old farmer died in Telangana on Thursday after suffering a heart attack while he was standing in a queue for collecting urea which was being distributed by the agricultural department.

The deceased, identified as Ellaiah, hails from Achamayapalli, Dubbaka Mandal in Siddipet District. He suddenly collapsed and was immediately rushed to a hospital but was declared brought dead.

Joel Davis Police Commissioner Siddipet said, “Today morning, agriculture officials were distributing urea in Dubbaka area of Siddipet district. A farmer by the name Ellaiah was also standing in the queue for collecting urea for his farm. He suddenly collapsed and was immediately shifted to a hospital where he was declared brought dead.” 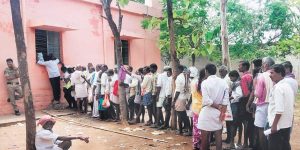 Police added that Ellaiah was a heart patient and had undergone treatment earlier.

“However, a case has been registered under relevant Sections of law at Dubbaka police station and the body has been shifted to the government hospital for post-mortem examination,” said the official.

“K Chandrashekar Rao government has once again let down the farmers of Telangana. Lack of planning and execution capabilities of Telangana Rashtra Samithi (TRS) government has become a curse to the farmers of Telangana. One farmer Ellaiah from the chief minister’s constituency in Siddpet district, from Dubbaka, has died of exhaustion today, while he was standing in the long queue to purchase urea, which currently is in short supply across all Telangana districts,” said Krishna Sagar Rao.

“This short supply of urea is due to utter mismanagement of the state agriculture department and the state ministry of agriculture in planning the logistics for distribution of urea,” he said