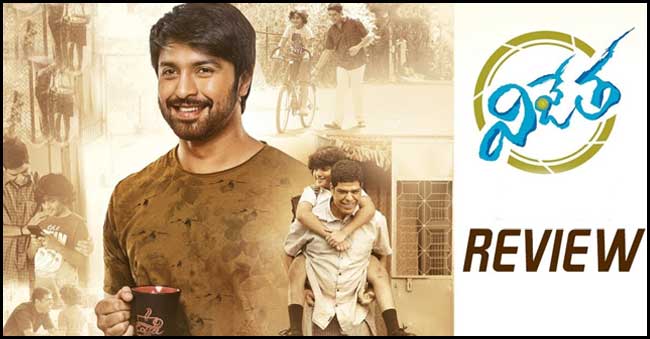 The producer Sai Korrapati took up the challenge of introducing megastar Chiranjeevi’s younger Son-In-Law Kalyan Dev to the silver screen. This mega hero and classy producer’s combo raised the bar. The title Vijetha which is one of the milestones of Chiru’s career added more crazy to this project which is already hyped by the invites at the pre-release function of this flick. Let us see if this Vijetha has got victory or not.

The story of Vijetha is not new to the Telugu audience as these kinds of stories are quite common in the history of Telugu Cinema. It is all about a middle-class jobless guy who was raised by his widowed father with great love and care. Hero enjoys life without taking up the responsibilities even though his middle-class father faces many financial troubles. In this regard, the irresponsible hero falls in love with a girl in his neighborhood. The rest of the story is all about how this hero reacts when his father gets a heart attack and changes his lifestyle to win both the trust of his father and love.

Vijetha lacks freshness in the story as the concept of Father and Son became aged old by now. Middle-class father and irresponsible son and their relationships worked well many times but the concept became boring for the new age viewers. Likewise all the regular mass masala entertainers and the way they are getting success with new approaches, this flick too got some added elements to the old genre of middle-class father-son relationships which saved the final verdict. Director Rakesh Shashi succeeded in making the audience involved in the story even though the scenes and screenplay are predictable with his style of narration. Sashi debuted with the flop Jatha Kalise but he failed flat for making some experiments in the screenplay. But for Vijetha, he took extra care such that he never tried anything different or experimental in his department. He mainly concentrated on extracting emotions from the father and son characters despite known story.

In the first half, he took entertainment to the first place with comedy and funny songs on Chicken. The movie seemed to be a roller coaster ride of emotions throughout the plot. Not just the father and son, each and every character in this flick appeared very real and original to the core. Many audience would relate themselves to some characters as the director had written original and day to day conversations to keep it simple. The clever director sent a new point in the whole father and son relationship. Rather than just winning the love of father with a nice job, hero would give the life that has lost for his father and this point touched every young viewer of this movie. Pre-climax, climax and some scenes regarding actress’s mother are main highlights of this flick which also reflects the talent of the director Rakesh.

Coming to the hero Kalyan Dev, one cannot declare that he is on par to the mega heroes but he did impress being a debutant with his skills. His dancing moves appeared at ease and cute which is a good thing for the mega fans. His acting skills and dialogue delivery are ok but one can say that he will improve for sure. Overall, Kalyan grabbed the limelight with fresh looks. Heroine Malavika Nair once again gave a fine performance. She will have a bright future if she got provided with meaty roles. Murali Sharma showcased his acting peaks with his character in this movie. This character will increase his mileage in Tollywood for many years. Director completely extracted the talent out of this fabulous actor.

Producer Sai Korrapati’s production values are super good such that each and every frame appeared rich. Camera work by Baahubali fame Senthil added more flavor to the emotions in this movie. Editing, music and dance departments excelled in their work.

Telugu Bullet Punch Line:  Old story narrated in a new way with an amalgam of emotions.

Hong Kong Chief Executive Carrie Lam said on Tuesday that she was not kept in the dark as China imposed the national security law...
Read more