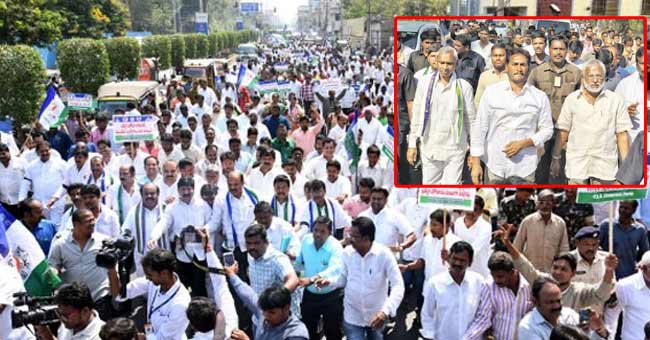 Being an Opposition leader who missed the CM Chair with a few numbers can do wonders in Assembly against the ruling party. But the AP’s Opposition head YS Jagan has been continuously failing to utilize all his advantages against the TDP. recently backfired State Band is a clear example.

YS Jagan Mohan Reddy missed any number of golden chances to mount pressure on his rival CBN in the happened four years. As he is getting some focused light for his Padha Yatra and Status fight, this son of late CM YSR is making bad strategies. The other day, he called for a Statewide Bandh and asked all the NGOs to cooperate with him. Despite their hard trails, the Bandh became a super flop with a very few arrests here and there. Not just the analysts, their own party leaders state stunning reasons for this disastrous show.

According to those leaders inside the party, Jagan took the decision of announcing the Bandh all by himself without having a word with senior leaders and think tank. Behaving like a dictator in the party being its Supreme, these leaders are not feeling good about his leadership skills and single-handed decisions regarding the party. If this is not enough, he didn’t consult other party leaders like CPI, CPM Lok Satta etc who always support Bandhs for people’s welfare. A hater of Jagan stated the fact that if his own property of Bharati Cements ran throughout the day, then it is natural for others to escape the Bandh. Every action of Jagan leads to his own destruction opines an analyst. Adding more fuel, his personal comments on Pawan only backfired on himself.

RS passes Institute of Teaching and Research in Ayurveda Bill

The Rajya Sabha passed the Institute of Teaching and Research in Ayurveda Bill, 2020. The Bill seeks to merge three Ayurveda institutes into one...
Read more
Health

Ahead of the Monsoon Session of the Karnataka Legislature from September 21, state Urban Development Minister Byrati Basavaraj tested COVID positive and was admitted...
Read more